Posted on December 19, 2010 by jrothmanshore

A week ago, I ordered a new TiVo premiere on the hope that it might allow me to actually cut out cable TV.  We watch so little television these days, and most of the shows we watch are on the major networks, so it didn’t seem like a good use of money.

The big gamble here was that I had no idea whether I would be able to receive over the air (OTA) channels.  Since we have what is probably the last standard definition TV’s in the country, we have no way of pulling in the OTA channels to test what reception is like.  We live in Cambridge, MA, and while it should in theory be very close to the towers, it is an urban environment and potentially subject to interference.  The only way to find out would be to order the TiVo and see what happens.
TiVo was offering a 30-day money back guarantee, so if it didn’t work out, I could always ship it back.  I also got an RCA ANT1600 flat digital antenna to go with it.  It was the one sold by TiVo itself, so I figured it was probably the one they recommended for best results.  After the 30% discount, free shipping, and taxes, I essentially paid $254 for a digital conversion for my standard definition tv (with TiVo capability).  If it works, I will break even in about four months after canceling cable tv service. 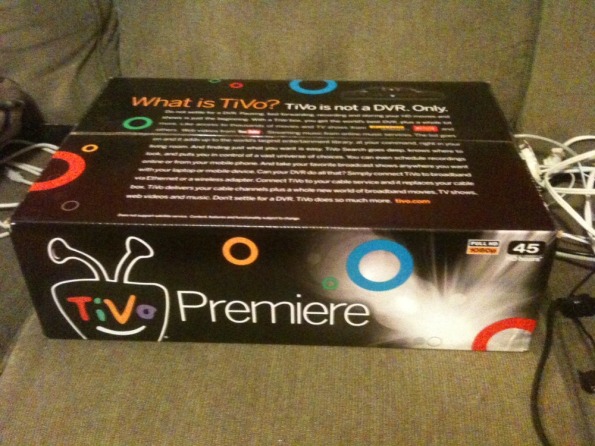 One week later, it arrived.  While all the instructions talk about the need to order a cable card, there is an antenna input on the back, and during the guided setup, it did have an “Antenna Only” option: 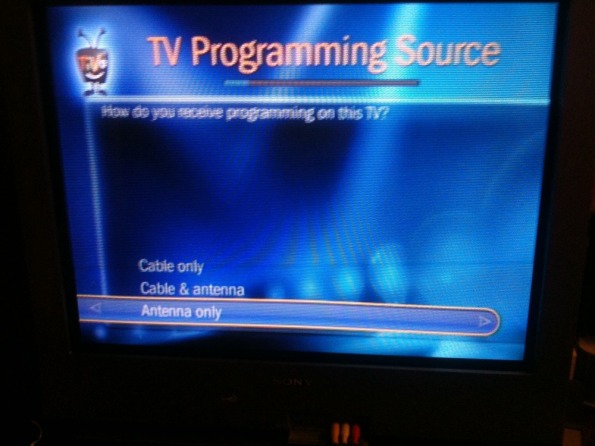 The TiVo then went through a channel scanning mode, and I knew the moment of truth had arrived.  I was about to find out whether it was able to tune the channels… and then the TiVo went through an hour long “Critical Service Update”.  I hate waiting.
At long last, it was done, and my hopes were fulfilled.  Crisp, clear, free TV.  All the major channels were represented (both Boston public tv stations, ABC, CBS, NBC, FOX, WB, and the former UPN, plus a bunch of secondary public tv channels and ION).  The gamble paid off!
One thing that Aviva noticed immediately was that the picture was clearer.  While the images are HD, they are being down-converted to standard by the TiVo, so I wasn’t sure why this would be.  Then I realized that our old TiVo had been using some compression algorithms which caused minor signal degrade, but the new HD model was not compressing at all: 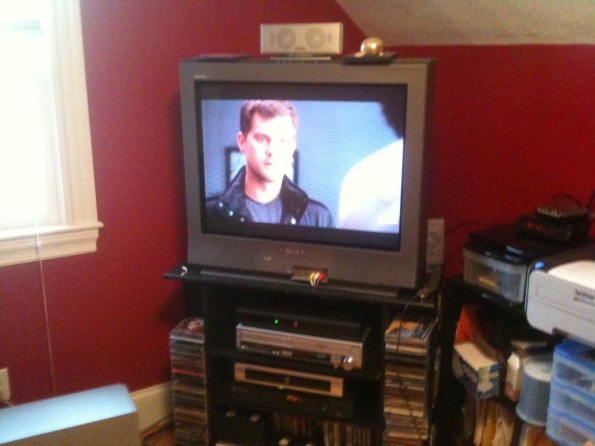 The new TiVo has a bunch of other nice features, too. It automatically found the old TiVo on the network and gave me the option to transfer the unwatched recordings.  Netflix is also well integrated, so much so that I think Aviva might actually start using it.
So all in all, this is looking like a success.  I haven’t actually had enough time to use it for the inevitable glitches to start showing up, and I’ll wait a few days before actually canceling the cable TV (have to wait until tonight’s Robot Chicken Star Wars is recorded by the old TiVo!).  The only risk now is that with everything else in high def, I’ll fall into the trap of deciding to upgrade the TV to a high def model, like one of my high school friends did.  If I do that, it will take me the better part of two years to break even.  I mustn’t… I mustn’t… I mustn’t…