Am I really saving money as a cord cutter?

A little over five years ago, we cut the cable cord. I had analyzed our television watching, and we really just watched a handful of shows.  I concluded that if I set up a TiVo with an Over The Air (OTA) antenna, I could get most of those shows in high definition for free (except for the TiVo service fee).  The remaining shows I could purchase from iTunes and still come out ahead.

A lot has changed over those five years. The TiVo worked great for a while, but after a few years the quality of the OTA signal started to degrade. More and more channels had a problems coming in. In the meantime, the Apple TV came out, and the functionality of Hulu’s service improved.

About two years ago, we dropped the TiVo altogether and just went straight internet only. Most shows we could find on Hulu, except for some premium content like Game of Thrones and Doctor Who which had to be purchased on iTunes.

And then there was the problem of CBS. While all the other broadcast channels were part of Hulu, CBS decided to go it alone and not put their content on the streaming site. Unfortunately, several of my wife’s favorite programs like NCIS are on CBS, so we were forced to buy them on iTunes.  Still, there were just a few of them, and the season pass subscriptions still amounted to just about one month of cable.

Here is where things took an odd turn. Hulu was full of commercials, which was particularly annoying given that we were already paying to get the service in the first place. We had gotten spoiled by years of fast forwarding through commercials on the TiVo, and the iTunes shows had the benefit of being commercial free (which was good, considering that they were $2.99 for a high-definition show).  Each time a Hulu commercial would come on that we couldn’t fast forward through, we would grumble.

So, when Hulu rolled out a premium version of their plan that offered no commercials, I jumped at it. It was only $4 more a month ($11.99 up from the regular $7.99), and I never looked back.

A few months ago, CBS rolled out their own digital stream service, called CBS All Access.  It was $6.99 per month, but that was still much cheaper than buying the episodes on iTunes. I immediately signed us up for the free trial.

We tried it with great anticipation… and we were very disappointed. It was filled with commercials – constantly. It was essentially just like watching regular broadcast television with no TiVo capabilities. My wife gave me a look which could be loosely translated as, “Why do you get to watch all of your shows on Hulu with no commercials and I have to sit through all these commercials for mine?”

We canceled the CBS trial after two days and went back to iTunes.

This has been working pretty for us, and today out of curiosity I decided to look at just how much we were spending.  First, there were the streaming services:

Okay, so $20 a month for streaming services.  Then, there were all of the iTunes shows. These are a little hard to compute since we periodically buy a season pass which is a large hit all at once and then watched over the course of the year. However, on the assumption that it evens out, I decided to look at a three month period.

It’s not easy to track iTunes purchases, but it turns out there is a hidden way. If you go to reportaproblem.apple.com, you can sign in and see all of your recent purchases. You can even sub-divide them by type (App, Music, TV Show, etc).

I pulled up my TV shows and looked at the last three months: 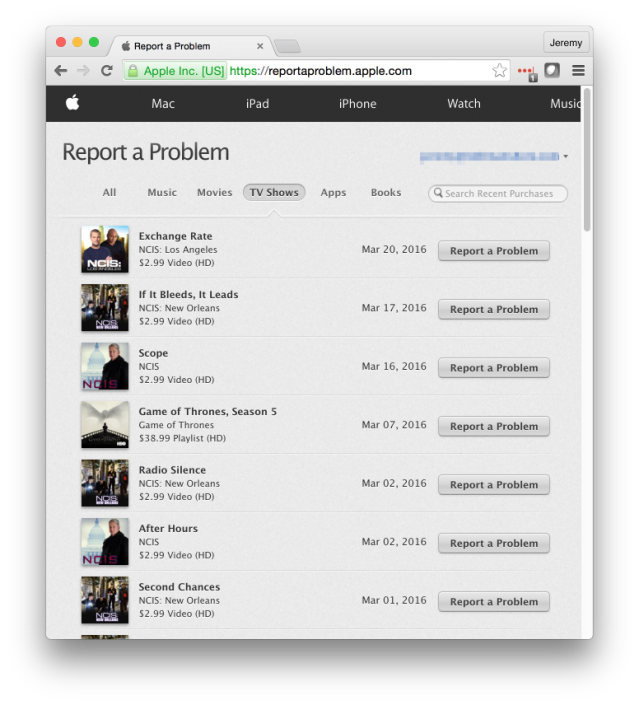 And the total? Over the last three months, we spent $182 on television programs. That’s about $60 a month.  Combined with the streaming services, we are running about $80 a month.

So, are we actually saving money? Once we ignore the promotional pricing that expires after a year, adding cable television service would cost somewhere between $80 and $130 a month, once you factor in taxes, fees, and renting the cable box.

So, worst case, we are breaking even.  The best case is we are saving money each month, but probably not more than $20-30.

However, there are some subtleties that put us a little further ahead.  Even if we still had cable, our iTunes charges wouldn’t drop to zero. One of us is traveling for work at least once a month, and we often download shows to our iPad to watch on the plane or train home. Even a streaming cable subscription wouldn’t help us here. We would still have to buy and download those shows.

Ultimately, cord cutting probably isn’t so much about saving money. We do save a little bit of money, but it’s really about control. We are only paying for what we want. Even if we only save a few dollars, they are dollars we feel good about.