On 21st century babysitting, and whether Skype will be the next Xerox or Asprin

Posted on December 22, 2010 by jrothmanshore
I’ve been meaning to get a flu shot.  I’m a big believer in vaccination, and if getting a shot gives me a decent change of avoiding a debilitating, multi-day illness, then sign me up!  Unfortunately, my doctor’s office is no where near the route between my daughter’s preschool and my office, and I just haven’t managed.  So I have to say I was pretty annoyed with myself when what I thought was a basic cold turned into what debilitating chills that left me unable to get up from the couch for the last few days.
By last night, I was able to move around, but I just didn’t have the energy to play with my daughter Ayelet (two years old) and son Rafael (six months old).  My wife would be coming home from a long day, and I started casting around for ways to keep the kids engaged without collapsing in the process.  I decided to see to call my parents to see if they were available to help babysit.  Keep in mind that they live 350 miles away, in Rochester, NY.
“Do you want to skype with Grandma and Grandpa?” I asked my daughter.  “Yes!” she enthusiastically responded.  Within a few minutes, we were connected, and my parents were talking to Ayelet about her day at school and watching Rafael show off his new proto-crawling, where with a lot of effort he moves forward a couple of inches towards some object of interest: 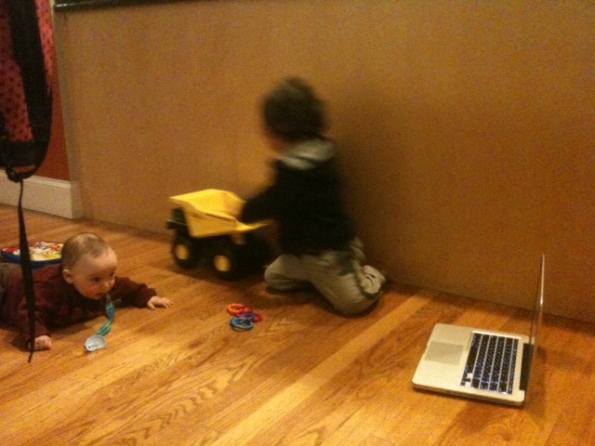 My parents are very good at videoconferencing with the kids.  They have certain puppets like “Tzippy” and “Triceratops” that make regular appearances, and there are some books we both have so that they can read stories to the kids.  They were even able to get down on the floor and play:

My kids loved it, my parents loved it, and I loved being able to just sit on a chair and watch and rest.  Ah, babysitting in the 21st century!  I’m not saying that I would leave the kids at home alone with a skype video chat to watch over them, but it certainly provides an extra pair of “hands” at critical times.
The funny thing about this conversation to me is that while I asked Ayelet if she wanted to skype, the Skype service was not actually involved.  We were using Apple’s FaceTime.  We originally used Skype when we started a year and a half ago, but we’ve switched to FaceTime for no clear reason.  My Mom started using FaceTime on her iPhone 4 and felt that the quality was better, but I think that has more to do with the small screen.  However, the FaceTime interface is just a teensy bit more streamlined, and we’ve gotten into the habit of using it.
Somehow, for us, Skype has become a verb for doing a video chat.  Asking Ayelet if she wants to “Facetime with Grandma and Grandpa” just sounds weird.
Both Apple and Skype seem to win and lose in this scenario.  On the one hand, it’s bad for skype, since we aren’t using their service, but if they retain the “verb”, they may continue to be the default choice for video conferencing for new users by sheer association.  Apple is benefiting in the sense that we are using them, but clearly their hold is tenuous.  As soon as an even easier or better quality service comes along, we will be on to the next “skype”.
There is a long history of companies whose brand name product becomes so associated with the concept that it becomes a generic name.  For the longest time, xerox was a verb that meant “to make a photocopy of a piece of paper”, regardless of whether it was a Xerox brand photocopier (although this seems to have faded in popular use).  I don’t even know what the actual generic name for Aspirin is.  You can find a list of many more products who were victims of their own success here.
I’m sure Skype will do fine.  Video conferencing is just one example of their broad services, and it’s not how they make their money.  And there are many genericized products where the original manufacturer is still going strong; just look at Kleenex and Band-Aid.
Still, their major outage today feels like bad timing.

This entry was posted in Uncategorized and tagged family, home technology. Bookmark the permalink.

3 Responses to On 21st century babysitting, and whether Skype will be the next Xerox or Asprin