Purim 2011: We dress up as the Apple product line

This Sunday was the Jewish holiday of Purim, which celebrates the Jews’ escape from a plot to kill them in Ancient Persia.  Similar to Halloween, it is customary to dress up in costumes, although both kids and adults often dress up.  We like to pick a family theme, generally drawing inspiration from the younger members of the family.  When Ayelet was one year old and a big fan of eating, we were a three course meal.  When she was two and very taken with blue footed boobies (my father is an evolutionary biologist and Galapagos expert), we went with a Galapagos theme of Charles Darwin, a giant tortoise, and a blue footed boobie.

This year, we looked at Ayelet’s fascination with the iPad and the invasion of multiple new Apple products into the house and decided to pay tribute (all the money we spent wasn’t enough?).  We are fortunate to have a very talented and creative famly member in the form of Aviva’s Aunt Rachel, who is one of a handful of people in this country who still know how to sew.

I must say, she really outdid herself: 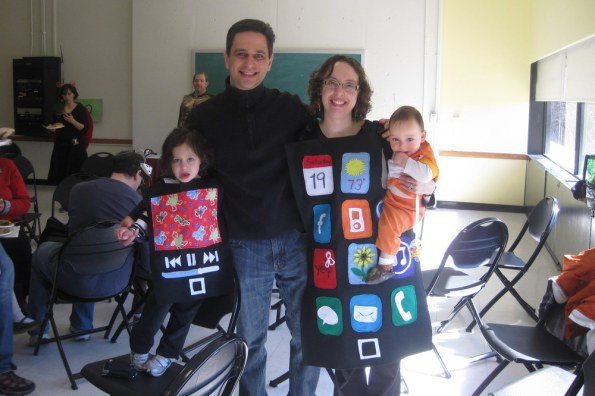 Aviva is an iPhone.  You have to admire the attention to detail Rachel paid on creating the icons of each of the individual applications: 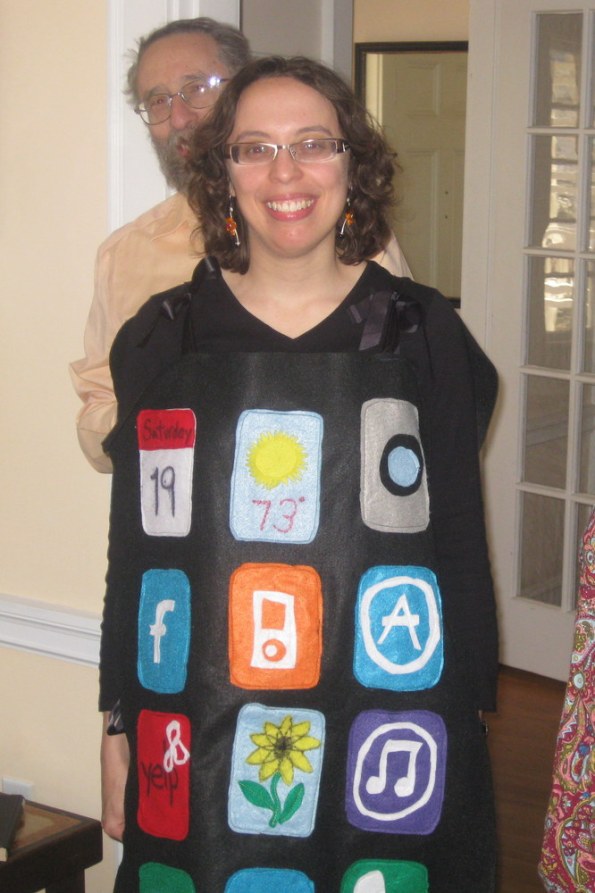 Although Ayelet is much smaller, she went as the iPad, which she uses it more than the rest of us.  Since she uses it primarily to watch videos, her screen is in video playback mode.  It’s hard to tell, but the image is of Sesame Street characters:

Rafael, as the littlest member of the family, went as an iPod Nano, of course.  Rachel chose the Orange version from the previous generation.  Note the “earbuds” hanging off his shirt (he is being paraded around by his cousin, dressed up as Tinkerbell):

The costumes were even complete with Apple logos on the backs:

See the full gallery on Posterous

If you haven’t figured out my costume, here’s a closer look:

Yes, I’m dressed up as Steve Jobs.  No delusions of grandeur should be inferred.

This entry was posted in Uncategorized and tagged family, iPhone. Bookmark the permalink.

1 Response to Purim 2011: We dress up as the Apple product line