Applied physics on the playground

Aviva had an all day meeting with an organization she does volunteer work for, so I spent the day as a single dad with two kids.  The weather has finally started to warm up in the Boston area, so I took them to one of the neighborhood playgrounds.  Ayelet, the three year old, has alway been very active, so traditionally a playground visit has meant keeping an eye on her as she went between various climbing structures, playground toys, and interactions with other kids.  In general, she takes care of herself, and I can relax, unless she needs some encouragement on a particularly challenging structure or help settling a dispute with another child.

Today was very different, however, since Rafael is no longer just a little baby in a stroller.  While just nine months, he is working hard on walking and wants to put everything in his mouth.  There was plenty to keep him entertained, but it was much more challenging to keep a general eye on Ayelet while making sure that Rafael was not trying to swallow fist-fulls of sand.  Clearly, this is the new normal.

When I put Rafael in a swing, Ayelet decided that she wanted ride in the swing too.  There were two swings next to each other, and I was trying to push them both at the same time.

This turned out to be more difficult than I thought.  Ayelet wanted to go “higher than the sky”, but that meant swinging faster than I thought Rafael was quite ready for.  Since different speeds required standing at different points to push, I was left straddled in the middle.
Fortunately, there is a simple solution.  My favorite subject in high school was physics, and one of the things that fascinated me about about it was the behavior of pendulums.  The amazing thing is that the period (the time it takes the pendulum to make a full cycle of forwards and backwards) is not affected by the weight of the bob at the end or the how fast it is swinging; it is a function of the length of the string.  In other words, two kids of different weights will take the same amount of time to go back and forth, no matter how fast or slow either one of them is going.  From wikipedia: I adjusted the kids motion so that one was traveling forwards when the other was traveling backwards.  This gave me enough time to adjust my own position so that I was closer to the center for Rafael’s shorter swings and further away for Ayelet’s longer swings.  Since the periods were the same, they would stay synchronized.
Well, that’s the theory you learn in high school, at any rate.  In the real world, there were several things that affect this – the string has actual mass, there is friction in the wing, and I am pushing both kids, so gravity is no longer the only force affecting motion.  Pretty soon, the kids motion started to shift, and they would end up swinging in the same direction at the same time.  But it was fun to try the theory out.
Rafael had other opportunities to learn about physics as well.  He is trying hard to walk – he has got the one handed walk down, and has even taken a few steps on his own when I trick him into it – so friction and gravity are pretty big. But he also had a chance to enjoy resonance: 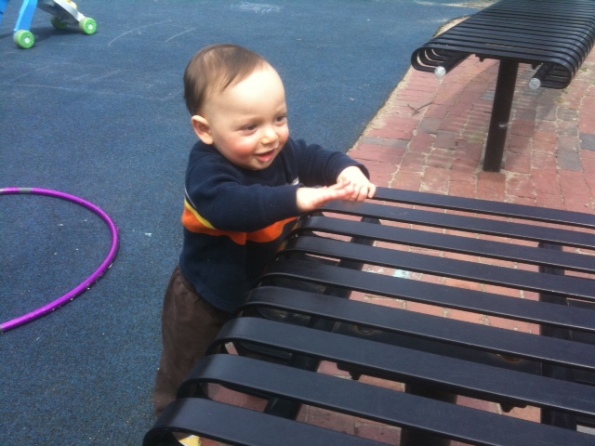 He discovered that the bars on the bench had a nice, satisfying twang when he banged them with his hand.  The physics of resonance are a little more complicated: but he enjoyed it nonetheless.
Later in the afternoon, we went to the science museum, where they had an entire exhibit devoted to the behavior of swings and pendulums.  Someday I will try to explain all of this to the kids.  But, if there is any cosmic justice in this world, I’m sure they will be as uninterested in it as I was in my father’s attempts to teach me about dinosaurs and biology.
For now, they can just enjoy the experience.

This entry was posted in Uncategorized and tagged family. Bookmark the permalink.

1 Response to Applied physics on the playground