Just whose iPad is this? How YouTube helpded my toddler steal my iPad

I remember April 2010 so clearly.  The anticipation – the excitement – the iPad!

The moment the iPad was announced, I knew it was the perfect device for us.  We live in a fairly typical urban Cambridge house – small footprint, very narrow.  The first floor has a living room and kitchen/dining room, the second floor has two bedrooms, and the third floor has a third bedroom and a study.  There’s no real place for a computer on the first floor, so the laptop lived on the dining room table during the week.

The table laptop was our main access point for casual browsing.  We would often read news on it while eating breakfast, check out the comics online, and use it for email in the evenings.  It occupied one of the six seats at the table, fighting for table space against breakfast dishes, mail that was dumped dropped down when we walked in the door, and our daughter’s art projects.

I had been interested in something more streamlined long before the iPad was announced.  When I heard that the kindle had an experimental web browser, I thought it might be a good alternative.  It was a small, sturdy, compact device that wouldn’t take up so much space and would allow casual internet access.  However, after playing with a coworker’s kindle for just a few minutes, it became immediately clear that the browser was too crude and slow for the kind of sites I wanted to visit.

That’s why when the iPad was announced, I knew it would be perfect.  It was a small form factor device with a big screen geared towards casual media consumption, and since we both had iPhones, there wouldn’t be a learning curve.  I pre-ordered one the day it came out, and I found myself watching out the window on the delivery date like a little kid waiting for a new toy.

The first couple of weeks were great.  It was exactly what I wanted.  We used it for reading the news in the morning, checking out the comics, sending email, just about anything.

My daughter, Ayelet, was two years old at the time and fascinated by the iPad.  She would watch me read the news and the comics as we ate breakfast and would express preferences about what comics she liked (she always wanted to see the comic with the dog).  I went ahead and installed a couple of kid-friendly apps like a drawing application, a letter game, and The Cat In The Hat.  As many people have documented, the touch interface was so intuitive that Ayelet could operate it with ease, whereas a computer’s mouse and keyboard were too confusing.

I didn’t know it at the time, but trouble started on Memorial Day weekend.  We were taking a trip to Portland, Maine, and I decided to load a video on the iPad so that Ayelet could amuse herself in the car.  I purchased a Blue’s Clues episode, having learned from Malcolm Gladwell how much thought went into the educational content of the show.  Ayelet loved it.

That was okay, but then I made the mistake of showing her a few videos on YouTube.  It started innocently enough; there was a song she liked, so I showed her a YouTube video of it.  However, every clip ends with a list of related clips, and all you have to do is tap on them, easily pivoting from one video to the next.

The iPad interface was so easy to use that Ayelet quickly figured out how to exit out of any app that she happened to be using (press the home button), tap the YouTube icon, and then start watching videos.  A session that might start with an educational application would quickly devolve into whining for watching a video, and if my back was turned, she might start up YouTube on her own.

Things became worse when Ayelet developed a full-on Blue’s Clues addiction.  We would periodically let her watch an episode while we cooked dinner or got her new baby brother ready for bed, but it turned into a devil’s bargain.  We bought ourselves 24 minutes of quiet, followed by a screaming fit when we said “no” to her demands to watch another episode after that.

Pretty soon, any appearance of the iPad turned into whining from Ayelet that she wanted to watch a video.  Our casual device had become anything but.  There were no more educational applications or peaceful reading of the news.  It was just, “I want to watch a video!”

In the end, we had to put the iPad away.  We put it on a bookshelf out of reach, where it quickly blended in with the other books.  It only came out on very special occasions.  Ayelet soon stopped asking for it, but it meant that we started to forget about it too.

So much for the iPad.

After sitting idle for months, I’ve been cautiously experimenting with the iPad again.

Ayelet is a year older now, and as a three year old, she has a much better attention span.  She is able to more fully engage in many of the applications, and we have added a few new ones like a memory card game and some new interactive electronic books.  I’m not sure whether she has gotten the videos out of her system or if the interactive applications hold her attention better.  Perhaps she is just more mature.

Each morning over the last few weeks, I’ve taken out the iPad at breakfast and read the New York Times (we have a weekend subscription that gives us free weekday electronic access).  Ayelet does ask for a turn, but she accepts my explanation that “I’m reading the news right now”.  She sometimes wants to see the pictures, but in general she is patient.  I will often, but not always, give her a few minutes after breakfast to use the iPad, but this means playing a memory game, a letter sounds game, or using an interactive book.  The demands for videos have stopped.  And the screaming when it is time to put it away have stopped, at least for now.

I continue to proceed cautiously and use it just for small periods.  It sits in the background playing music over Pandora through the Bose, and we use it in the evening, but the rest of the time it still sits on the bookshelf.

So perhaps I have my iPad back.

Ayelet’s little brother Rafael is now almost one year old.  While he used to just ignore it, that seems to be changing… 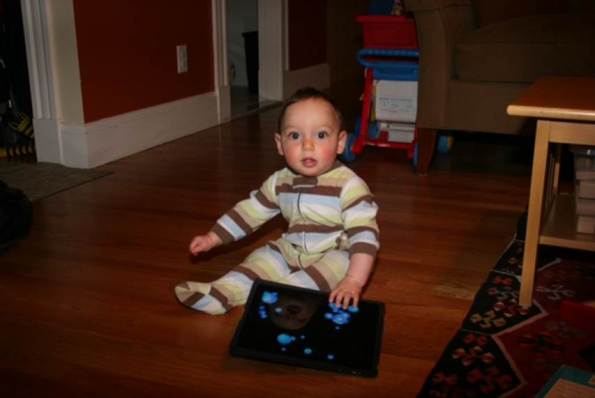 1 Response to Just whose iPad is this? How YouTube helpded my toddler steal my iPad