I came across a very interesting site today – www.cablemap.info.  It’s an overlay of the world’s submarine data transmission cables on top of google maps, allowing you to see how the world interconnects.  It appears to be the work of one person, Greg Mahlknecht (@thewomble_za) of South Africa.

Looking at the map highlights a number of interesting issues.  Take Australia, for example: 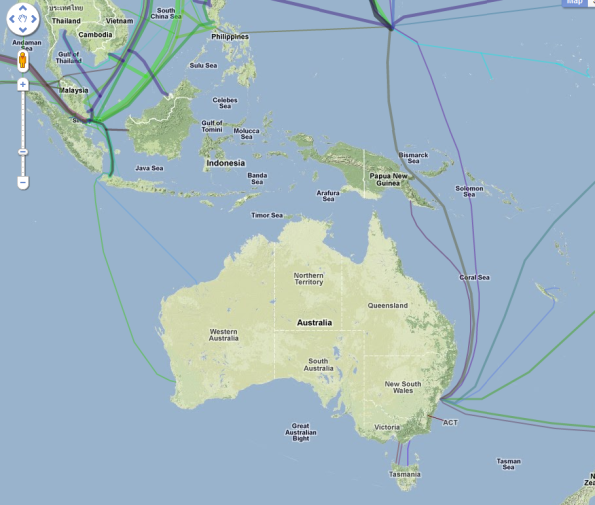 Someone had told me years ago that the Western and Eastern halves of Australia don’t actually connect, and you can see it is true from this map.  The undersea cables that connect to Western Australia run out through Indonesia to Singapore, and from there you would have to go through the Philippines or Hong Kong to get to Guam before you could find a connection back to Sydney and Eastern Australia.  It is possible that there are overland cables connecting the continent, which don’t seem to generally be shown on the maps, but from what I know of Australia’s terrain, I wouldn’t be surprised if there weren’t any.

Another interesting issue is I see an explanation for some of the routing quirks I have seen when troubleshooting Akamai routing.  I often have to deal with clients who have DNS misconfigurations that cause problems for Akamai acceleration, and in one case I had a client who was accessing the Internet in Sydney, Australia, but resolving DNS in Singapore.  What really surprised me at the time was that the route between the client and the edge server in Singapore went through Los Angeles!

As I look at the map now, I can see why this might occur:

While there are routes that take a user through Guam and/or Hawaii, most of the cables in the Pacific link directly between West Coast of the United States and the Japan region.  While shorter paths may exist, the actual path is dependent on peering relationships between different providers.  There are many more paths that would potentially run across the full length of the pacific, and we know that BGP does not look at performance as its main metric for routing decisions.

There is a lot of interesting detail looking at other parts of the world.  If you want to get to Asia, you basically have to either route through India or Africa.  And the Middle East seems to depend mostly on connections that run from France.

Definitely worth checking out the site!

This entry was posted in Uncategorized and tagged akamai, DNS, ISP, performance, routing. Bookmark the permalink.