Posted on December 18, 2011 by jrothmanshore

I love being able to stream music from my iPhone and iPad to the Bose Wave Radio in our kitchen, but over the last several months, we have been doing it rarely due to interference problems.  One day it would work fine, and then the next day it would be constantly cutting out. it would seem that the Airport Express would somehow lose the stream, and while the iPad was still sending music, nothing was coming out.

After experimenting with various configurations, I came to the conclusion that I was running into signaling problems.  Our wireless router for our house is up on the third floor where the cable modem and television are, but the wave radio is in the kitchen on the first floor.  Our Airport Express connects to our network wirelessly, so in order to stream music to it, the signal was traveling from our iOS device in the kitchen up to the third floor, and then back down to the Airport Express.
The thing that has really puzzled me about the problem is that we have never have signal strength problems between the first and third floor.  Our phones always show three or four wireless bars, and we have streamed high quality netflix streams to them without signal issues.  While that is only a single trip in those cases from the router down to the device, I would have expected video to consume so much more bandwidth that we would not have problems with a double-trip (phone to router to airport) using just audio.  My belief has always been that the problem is therefore with the Airport Express’s connection itself, but I have no way of proving that.
Then, the other day I saw that Microcenter, a nearby electronics store, was having a sale on power line adapters.  I remember reading about power line adapters as a prototype technology more than ten years ago, but now it is mainstream.  The idea of a power line adapter is that you already have wires running all over your house transmitting electricity.  If you hide a signal inside of the power transmissions, you can use it to deliver network access as well.  In theory, your access could bleed outside your house, so the data is encrypted.
It occurred to me that a power line adapter might be an easy solution to my problem.  While one hop would still be on wireless, the suspect Airport Express leg could travel over the power lines.  I picked up a Mega Plug AV 200 mbps adapter on sale for $65.   I went and plugged one half into a power outlet on the third floor and connected it to our router.  I then plugged the other end down in our kitchen.  It immediately connected to the first adapter and indicated that it had an active signal.  I connected the Airport Express and re-configured it to act as a second access point for our network connection. 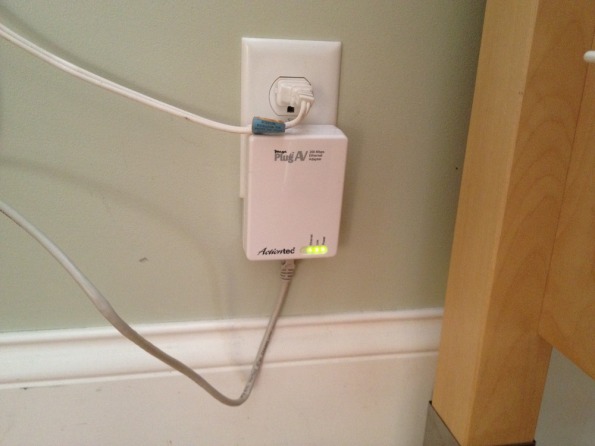 The result was a huge improvement.  We haven’t had the signal cut out in more than two weeks, and I have been using heavily every morning and evening.  Because it acts as its own access point, when devices are downstairs, they connect directly to the Airport Express .  Music is now streaming directly to the Airport Express, and if they need internet access, it is traveling via the power line adapter up to the router on the third floor.  When the devices are upstairs, they sense that the signal from the router is stronger and connect directly to it.  I can tell whether a device is connected to the router or the Airport Express by checking the station, since our router is set to use channel 7 (a result of earlier experimentation while trying to fix our signal problems) while the Airport Express still uses the default channel of 11.
Another possibility I had been considering was to get a higher end router that maintains two separate but connected networks.  This might have caused less interference, but I hated the idea of throwing out a perfectly good router, and the power line adapter was much cheaper.