Thanks, UPS, for breaking my door handle! No, don’t worry, I’ll pay for the repairs myself

Ever since we installed the no-hands prop for our storm door, it’s been much easier to get the kids in and out of the house.  However, when we arrived home today, we discovered something missing:

My first thought was vandalism, but I then discovered a package tucked in between the storm door and the real door (another benefit of having a storm door in an urban neighborhood).  Presumably, the delivery person had knocked off the door handle in the process of opening it to stick the package in.

Of course, there was no note, like “Sorry! Didn’t mean to break your door handle!”

My wife’s first response was, “Are they going to pay for it?”

This is the difference between me and my wife.  The idea of calling up UPS on the phone and explaining to them that they broke our door and should pay for it fills me with absolute dread.  Aviva is much better for advocating for herself (or us) with random people.  When we took our trip to Maine, she’s the one who argued with the ferry operator that they could indeed fit our car on the boat.  I would have just looked at the guy pleadingly.

I have no proof that UPS actually broke the handle, even though that is the logical conclusion.  How much time and arguing and stress would be involved?  It just didn’t seem worth it.

I went over to Home Depot and found that these handles are pretty much one size fits all (a benefit of going with a standard, cheap storm door).  For $12, I purchased a replacement handle.

The instructions turned out to be more complicated than I was hoping for (it involves measuring the door’s depth and then using a pair of pliers to snap a rod to the appropriate width), but then it occurred to me that perhaps I didn’t need to replace the entire handle.

As luck had it, the mechanisms were identical, so all I had to do was detach the broken handle and attach the new one to the old latch: 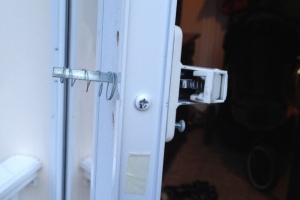 So yes, I’m a sucker.  UPS broke my door, and I didn’t even complain.  I just paid the money and fixed it for them.

However, when I think about the time I would spend arguing with them, and if successful, the hassle of sending them a receipt and getting a check mailed to me for the difference, I have to say that I’d rather just pay the $12 myself.  It’s cheaper.

@jrothmanshore Oh no! I’d be happy to involve local management and have them look into it. Pls send contact info to [@@@email redacted@@@] ^SP @ups

I found this very gratifying.  Really what irked me most was the lack of acknowledgement that they had done anything to the door.  The fact they took the time to find the post (via twitter) and reach out made me much happier.  I emailed the address and told them not to worry about it further.

This entry was posted in Uncategorized. Bookmark the permalink.

3 Responses to Thanks, UPS, for breaking my door handle! No, don’t worry, I’ll pay for the repairs myself