A child’s menorah should not be flammable

Posted on December 11, 2012 by jrothmanshore

Well, really no menorah should be flammable, but that’s besides the point.

A week ago, my four-year-old daughter proudly brought home a menorah (or more correctly, hanukkiah) she had made at the Jewish after-school program she attends a few days a week. 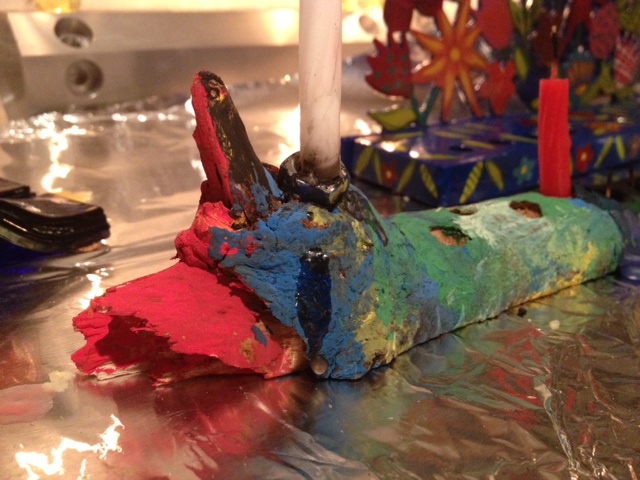 Someone had taken a tree branch and cut it in half, and then had the kids paint it.  They then drilled holes for the candles.  A note from the school explained:

…the Chanukiot which the kids have been making, are inspired by a drawing from one of the three year olds, who drew a menorah covered in leaves and flowers. Of course, the design of the original Menorah in the temple was an evocation of a tree of some sort, and so we thought ‘why not create chanukiot from branches’. We hope you enjoy them – the kids have done some very beautiful work on them.

My mind immediately raced back to a family incident from when I was six or seven.  At my own hebrew school program, all the kids made Shabbat candle sticks and decorated them.  I proudly brought mine home and insisted that my parents use them that Shabbat.

Did I mention that the candlesticks were made out of styrofoam?

I don’t know if my parents just weren’t thinking, or if they didn’t have the heart to tell me I couldn’t use them, so use them we did.  We lit big, thick shabbat candles that burn for hours, so the candles were still going when we went to bed.

At some point, the candles burned all the way down to the styrofoam base, at which point they caught fire.  They then proceeded burn into the table.  This was before strict smoke detector regulations were put in place, but the smell of smoke woke my parents up, and they averted a disaster.  They prevented the house from burning down, but not before a nice five inch diameter burn mark had been etched into the dining room table.

For years afterwards, we still used that table.  Often, a trivet or other centerpiece was used to cover the burn mark.  It still sits in my mother’s sewing room.

So, when I saw my daughter’s wooden hanukkiah, I was instantly nervous.  We had a nice, metal hanukkiah for her to use, but she of course insisted that we use the wooden one as well and light both of them.  She was so proud of it and so excited to use it, I just didn’t have the heart to tell her no.  With memories of my childhood and against my better judgement, I relented.  Now I know how my parents felt.

For the kids’ hanukkiot, we were using the cheap multicolored candles sold in all the stores which have the benefit of burning down quickly.  I watched them closely, and the first few nights went without incident.

Tonight, we weren’t so lucky.  The candles had melted onto the wood, and soon we had a nice little fire burning at one end. 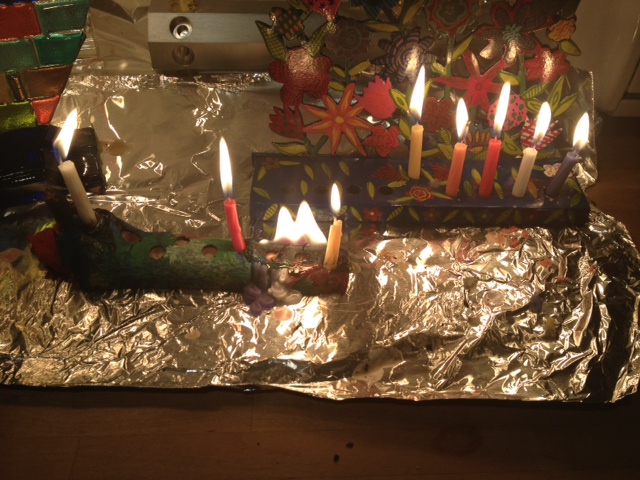 The two middle candles have melted down, and now the wood is burning

After documenting with a picture for posterity, I blew the candles out.  We happened to be skyping with my parents so that they could enjoy watching the kids light, so they got to particularly enjoy this repeat of old history.

Fortunately, my daughter was not traumatized by having her candles blown out.  Hopefully tomorrow night she will agree to just a single hanukkiah.

One more thing… as if this ritual wasn’t already dangerous enough, naturally my two-year-old son wanted to light his hanukkiah as well.

We tried to help him, but he insisted on doing it “…by…my…self”!  My kids are extremely dextrous, and I was pretty confident that he would be able to do it.

Standing inches away, gritting my teeth, I handed him the candle and helped him say the blessing as he lit each candle. 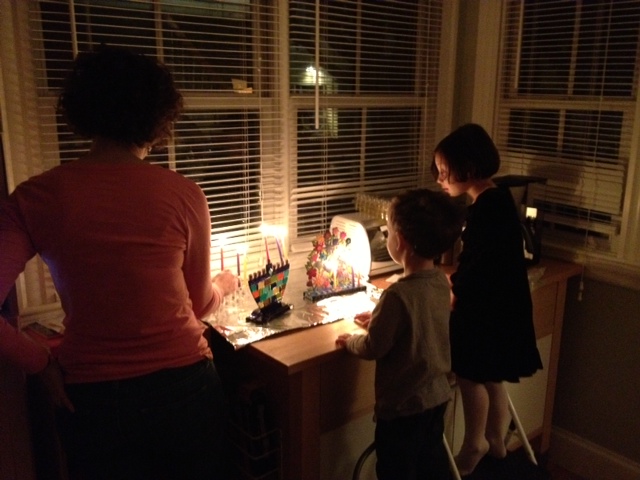 No one was harmed in the production of this photograph

Sure enough, he did flawlessly.

Even for me, that took guts.

This entry was posted in Uncategorized and tagged family, judaism, parenting, shabbat. Bookmark the permalink.

1 Response to A child’s menorah should not be flammable