Everyone knows the phrase “you can lead a horse to water, but you can’t make it drink.”

That pretty much sums up my son’s relationship to gloves.  He absolutely refuses to wear them.  We’ve tried mittens, and we’ve tried gloves, but they never stay on for long.  It always starts with a struggle to maneuver his fingers into the the appropriate hole, and just when we succeed, he decides that he doesn’t like it and yanks them off.  Pretty quickly we give up and let him go barehanded.

Of course, we still insist that he walk around with his mittens hanging from the sleeves of his coat by clips.  In theory, this way he could always change his mind and put them on, but really it’s just so that people who look at him don’t assume we are abusing our son by sending out in the cold without gloves.

We found ourselves fighting this battle once again this past weekend when I was taking the kids to our synagogue.  Normally I would just let him ride in the stroller without anything on his hands while (unsuccessfully) encouraging him to keep his hands under a blanket.  However, before we even got out the door, the kids started squabbling about who was going to sit in the front of the stroller.  I just didn’t feel like dealing with their arguing, so I suggested they ride their scooters instead.

Both of our kids love their scooters – my son loves his so much that he has worn the toe completely off of his right shoe, which he uses as a brake. 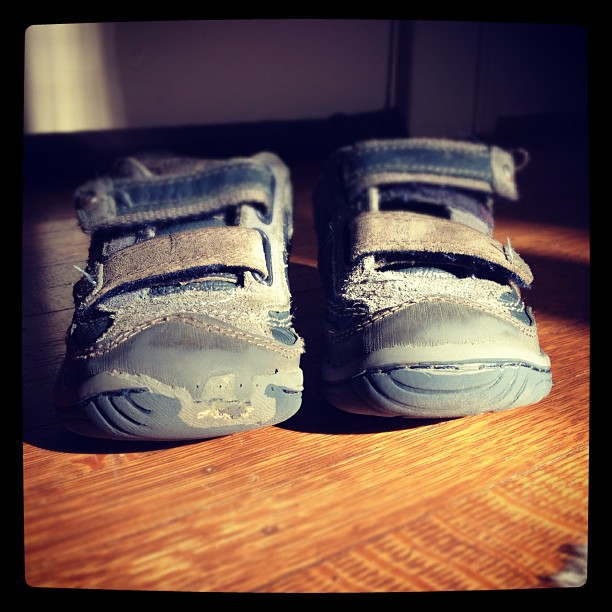 Rafael uses the toe of his foot to brake, which has worn out one shoe prematurely

The scooters have been mostly put away since winter arrived, but this day was warmer than usual.  I decided it was warm enough to take them out, but it was still windy, so I insisted that they had to wear gloves if they wanted to ride.

My son agreed to this, but we spent the next ten minutes trying to get various mittens or gloves onto his hands.  We tried thin ones that were easy to guide over his fingers, and we tried thick mittens that only required getting the thumb into the hole, but each time we succeeded in getting them on, he got frustrated and insisted on pulling them off.

Then, my wife had a brilliant idea… socks!

We took a pair of socks and slid them over his hands.  Since there were no fingers to guide into holes, they slipped right on immediately.  They were thin enough to give his thumb enough range of motion to grip the scooter handlebar, but they would still protect his hands from the cold wind.

They certainly don’t provide the warmth of mittens or the range of motion of gloves, but they are far better than sending him out with exposed skin on his hands.  And they gave him enough range of motion to ride his scooter without having to mediate a battle over who sat where in the stroller.

He kept the socks on the entire way, riding his scooter happily.  It may look funny, and I still insist that he keep his mittens hanging from his coat sleeves so that people don’t think I’m too cheap to buy him proper mittens, but I’ll go with whatever works.

This entry was posted in Uncategorized and tagged family, parenting, shortcuts. Bookmark the permalink.