A word of thanks to my tissue donor

When I think of human body part donation, I immediately think of the big ones – hearts, lungs, kidneys, and livers.  These are the procedures at the cross section of medical technology and human biology that turn one family’s tragedy into another family’s life saving miracle.

I’ve known that there were other kinds of donations, too, like corneas or skin grafts. But I never paid much attention until this year, when I found myself the recipient of someone else’s bone tissue.

This isn’t a dramatic story.  My life was never at risk.  The tissue donation had probably taken place months earlier.  But it will have a big impact on the quality of my life.

For example, I will be able to eat an apple.

Last December, I developed an ache in my lower front tooth.  I’ve had a lot of fillings (I wish I had taken better care of my teeth when I was younger), so the occasional ache is nothing new, but this one didn’t go away.  Fearful I had cracked it, I went to my dentist.

He couldn’t see anything wrong, and it didn’t hurt when he gave it a firm tap, so he took an X-Ray and found something that surprised him. 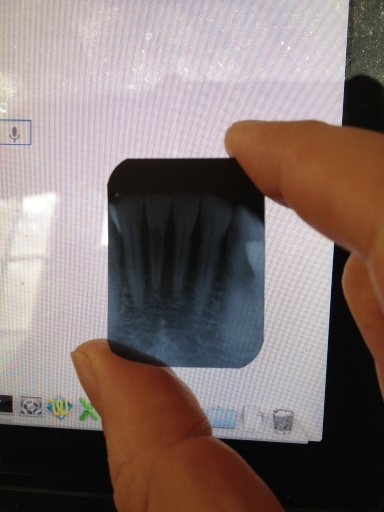 There was a shadow on the root of my tooth that indicated a very rare condition called internal resorption.  The tooth was essentially attacking itself from the inside out.  My dentist told me he can easily go 5-10 years without seeing this in any patient.

No one knows what causes it.  There are some theories that perhaps it could be related to a trauma early on, but I have no recollection of an injury.  It was not in any way caused by poor brushing or flossing from my youth.  I was simply unlucky.

A couple of visits to specialists informed me that there was no saving the tooth.  It was too far gone for a root canal.  In fact, most people never have any aches from this condition and don’t discover a resorption until the tooth breaks off in their mouth.

A periodontist told me that my best hope was for an implant, but it was not certain that this would be possible.  The lower front tooth is the smallest one in the mouth, and the bone is extremely thin there.  For an implant to work, the metal post needs to fuse with the bone, and there often is not enough bone to support it  If an implant didn’t work, we would be looking at either a bridge or a denture.

A bridge would be a very undesirable choice for someone my age, since it compromises the teeth on either side of it.  I am in my late 30s.  “A bridge is unlikely to get you over the finish line,” my periodontist explained to me.  In other words, I would live much longer than the bridge, and that would mean dentures by my 50s or 60s.

The only way to know if an implant would work was to remove the tooth and try.  The tooth came out easily enough (frankly, it was easier than some fillings I have had), but there was virtually no bone left in the gap.  And this is where the tissue donation came in.

My periodontist packed the hole with ground up bone tissue.  Bone is apparently a very dynamic organ.  We think of our bones as solid, but they actually are constantly absorbing and regrowing tissue.  While the ground up bone is not actually alive, it would create a lattice work for the living bone around it to build on.  If all went well, within two months, my jaw bone would re-knit into the hole and repair itself.  The powder would be absorbed and simply disappear.

For the next eight weeks, I waited.  I had the occasional soreness which I hoped was a sign of bone growth and not a failure.  And I wore a “flipper” tooth, which is essentially a retainer with a tooth on it.  It was there to protect the wound, prevent the other teeth from shifting around the hole, and allow me to smile without looking like a pirate.  I could eat most foods, but things that required big bites like a bagel were challenging.  Apples were impossible.

When the time came for the implant attempt, I went in with great nervousness and tried to prepare myself for failure and a bridge.  The procedure went on for 45 minutes, and the longer it went, the more hopeful I became.

When he was done, he said, “Well, that bone powder worked out really well for us.”  Apparently the bone had completely grown back into the hole.  It was perfect. 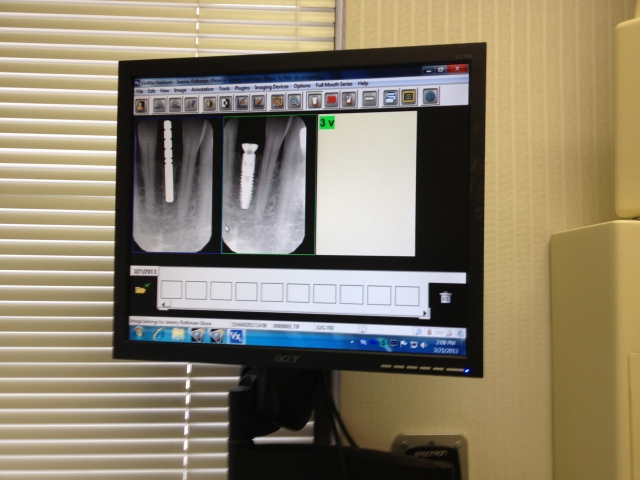 The bone had successfully regrown and was holding the implant

I had my new implant.  It still wasn’t strong enough to hold a tooth yet, however.  The bone needed to integrate the screw post in, and only if that was successful would my dentist be able to place a crown on it.  I still faced the possibility of an implant rejection, so I went into another 8 week waiting period.

Luckily, the implant healed well, and soon I was back to my regular dentist to get fitted for a crown.  5 months after my tooth was removed, I had a new crown placed in.  No more “flipper” tooth with a retainer.  I can eat and smile like a normal person again.

I keep thinking back at how lucky I am not to have a bridge, and I know that without the donor tissue, that woud have been my only option.  I have no qualms about receiving it – hey, I figure, they clearly don’t need it anymore.  However, I still understand very little about where it came from or how it made its way to me.

I’ve asked some friends in the medical profession, and none of them seem to know much about the process.  I’ve also learned that they now have sources of bone tissue that come from cows or pigs.  It’s possible mine isn’t from a person, although based on the questions I asked my periodontist at the time, I’m pretty sure it was human.  But I just don’t know.

This entry was posted in Uncategorized and tagged family, medical. Bookmark the permalink.

4 Responses to A word of thanks to my tissue donor