Posted on October 7, 2013 by jrothmanshore

After nearly two years of being a loyal Instacast user for managing my podcasts, I just deleted the app. Instacast has “upgraded” itself again and in the process eliminated its most useful features.  And Apple’s once inferior Podcasts app has finally come into its own.

When I first started using Instacast, Apple had no podcast subscription options other than syncing with iTunes or downloading individual episodes by hand.  Instacast was a revelation in that it managed subscriptions directly on the phone, completely eliminating the need to hook my iPhone up to my computer every day.

At first Instacast took some getting used to, but what I most disliked about it soon became my favorite feature. Rather than allowing you to build your own custom playlists, it insisted on managing them for you with “smart playlists” that would automatically update as new episodes were loaded. While you couldn’t change the order of the playlist, you could change the order of the subscriptions themselves, and the smart playlist would order podcasts based on that.

To my surprise, this worked out well, since it could automatically match my own hierarchy of preferred podcasts.  I don’t want to just listen to whatever is oldest or newest.  There are podcasts I want to listen to as soon as they come out, like On The Media for its insightful news analysis. Then there are daily podcasts like NPR Story of the Day or Marketplace Tech Report, which I want to listen to each day as soon as they come out (assuming I’ve finished that week’s episode of On The Media, of course).  Then there are weekly shows I want to listen as time allows (This American Life, Wait Wait Don’t Tell Me), and finally more rarely published shows that I will listen to when my main shows are exhausted (Freakonomics Radio, RadioLab, The Truth).

Instacast allowed me to replicate this automatically, with preferred shows automatically jumping in ahead of less important ones. I could occasionally tweak the order of the subscriptions to fine tune what came next, but in general all I had to do was open the app once a day to download new shows, and Instacast did the rest automatically.

A few months into my using Instacast, Apple finally rolled out their own Podcasts app.  I took a look and quickly recognized it as inferior.  It had no playlist ability at all, and you had limited control over what subscriptions would be downloaded versus streamed. Everyone panned it, and I stuck with Instacast.

Then, last year, Instacast upgraded. The author finally accepted that users wanted to create their own playlists, so he changed the interface around to support it. This was good, in theory, but you had to select episodes in order of how recently they were added, rather than by subscription. They were all jumbled together, and I couldn’t sort it out by my preferred listening hierarchy.  With great difficulty, I found the old “sort by podcast subscription order” option inside a hidden menu (you had to hold your finger down on the smart playlist to pull up a secret screen), so I stuck with Instacast.

Now, with iOS 7, Instacast has “upgraded” again, with disastrous results. I quickly discovered that when one podcast finished playing the next one no longer started automatically. With great difficulty, I figured out that the author had completely disabled automatic playback. If you wanted to listen to a series of shows, you had to add podcasts individually to the “Play Next” list. What is the point of the smart playlist if you have to do this manually? And even worse, they *still* wouldn’t play back.  All I wanted to get in the car, hit the go button, and have my podcasts play back in my preferred order – why was this so hard?

I couldn’t figure out what I was doing wrong.  I was sure there was some way to fix it, but it wasn’t intuitive. At this point, I was sick of Instacast’s confusing interface decisions and decided to explore other podcasting apps.

First I looked at Downcast, paying $2.99 for the privilege of trying it out, but I quickly found it had no real smart playlist option either.  It had the ability to manually set a “priority” for a podcast between 1 and 5, but this was cumbersome to set up and did not have enough range for me to sort list of 15-20 subscriptions.

Then, I looked at Apple’s podcast app again, and found that it had come a long way. They had added playlists, included smart “stations” like one for unplayed episodes.  This playlist had an easy to access settings menu, which included a sort order of “My Podcasts”, which replicated the old Instacast sorting functionality I missed so much. 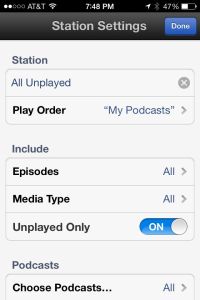 They also had fixed options to control the playback order of individual subscriptions (newest versus oldest) and which episodes to downloaded. And they had a whole slew of features that I wished Instacast had, like the ability to maintain podcasts in the list without having them automatically download new episodes.  This way, if I am going on a long trip and want some extra podcasts to listen to, I can download them without having to actually subscribe.

Apple had looked at the competition and copied the best features into their own app. Meanwhile, Instacast had focused on obscure use cases from “power users” who want to do fancy things like sync podcasts across devices. They left “normal but heavy users” like me behind by getting rid of the features that made it simple and automatic. 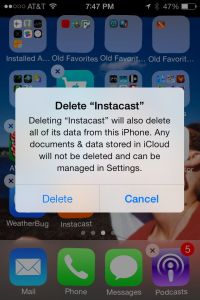 So long, Instacast!  And thanks, Apple!