Posted on November 3, 2013 by jrothmanshore

Last week, I came across an interesting post about how DIY enthusiasts could remove a lens from a laser pointer and use it to create a simple microscope using an iPhone. I like doing experiments with my kids and teaching them about science, and this seemed like a great way to make microbiology accessible to kids. Taking turns looking down a microscope lens is too challenging for young kids, but having a screen that we could look at together and point out interesting features would be much more accessible.

The deconstructed laser pointer was a bit more DIY than I was quite prepared for, but I realized if just placing a lens in front of the iPhone’s camera works, you could just as easily stick a camera up to an existing microscope.  My plan was to use an iPad so that there would be a larger viewing screen.

On Amazon, I ordered a $35 kids’ microscope and a set of 25 prepared slides for another $15.  A few days later, I had the microscope and was ready to try it out. 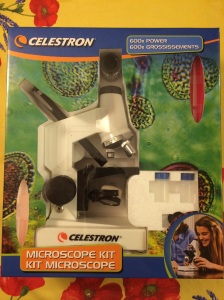 Kids’ microscopes can be found cheaply on Amazon, like this one from Celestron, discounted to just $35

It’s not exactly a high quality piece of lab equipment, but I was able to set it up quickly. I placed an iPad up to the lense, and with a bit of fuss was able to get it to capture the image. However, I found it to be quite touchy and the faintest bit of wobbling would cause it to lose the image.

Then, I tried my iPhone 5S, which had significantly better results. It focused and adjusted the light levels almost instantly, making it much more useful than the iPad. Clearly, the quality of the camera is much more than just the difference in mega-pixels (8 for the iPhone, 5 for the iPad). 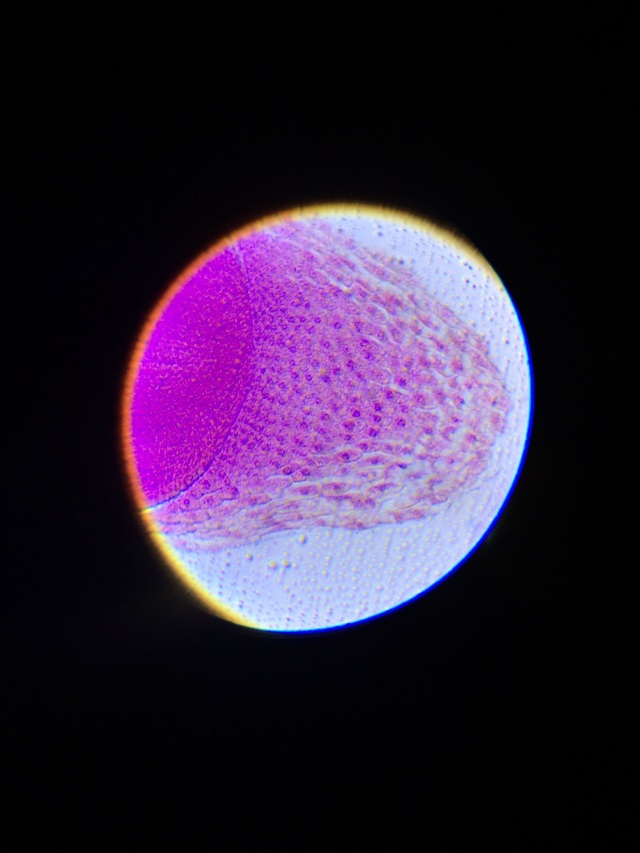 By placing the iPhone up to the microscope lens, you could clearly see the dividing cells in a corn root

The effect was really quite amazing.  You could see individual structures, like the dividing cells from a corn root above.

The phone could get easily knocked off angle, so I improved a simple stand to rest the iPhone just a faction of an inch above the microscope. 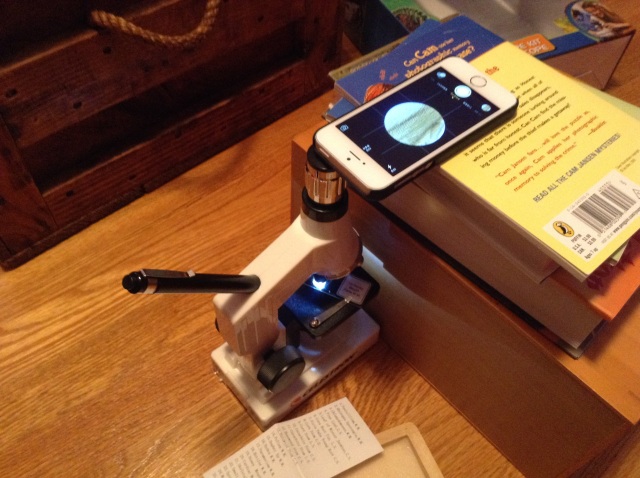 My only problem now is that the image was still much smaller than I wanted to be able to interact with the kids. Then I had an inspiration – mirror with the Apple TV!

I have used the Apple TV for life-sized skyping, so I tried the same trick to broadcast what was on the phone’s screen to the HDTV. 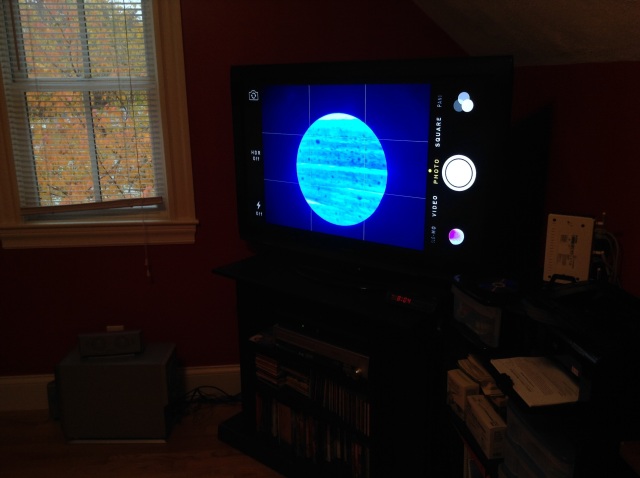 By mirroring the iPhone to the Apple TV, the microscope image became huge

Now, I had a life-sized digital microscope screen that the kids and I could really look at together.

Biology isn’t quite my field (I’ve always been  more interested in physics), but my father is a biology professor at the Rochester Institute of Technology. Using Facetime, I was able to show him what I was seeing in the microscope, and he taught me some of the basics about what I was looking at.  I was ready.

The kids were up extra early today since it was daylight savings time, so I figured this would be a great morning activity. I didn’t really expect my 3-year-old son to get it, but my 5-year-old daughter is quite interested in things like this (she is particularly fascinated by human evolution and often asks to talk about “the early humans”), so I thought she might be really into it. 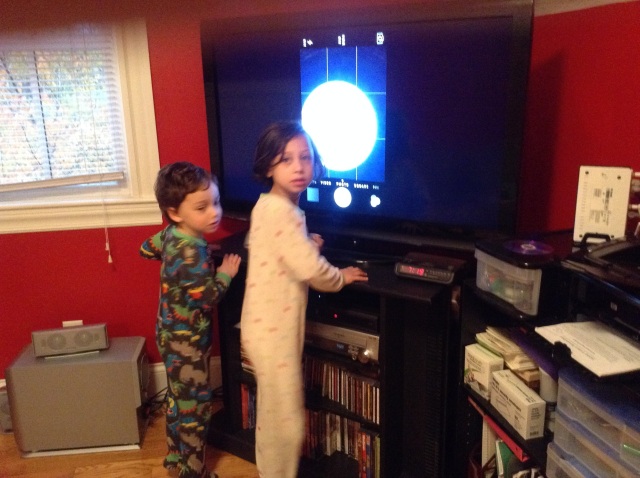 Sadly, no luck. We looked at some red blood cells and some tree roots, and my daughter simply rolled her eyes and said, “This is boring!”

I continued to play around with the microscope that morning on my own, dragging my daughter at one point to look at some amazing close-ups of a bee proboscis that showed the individual hairs. 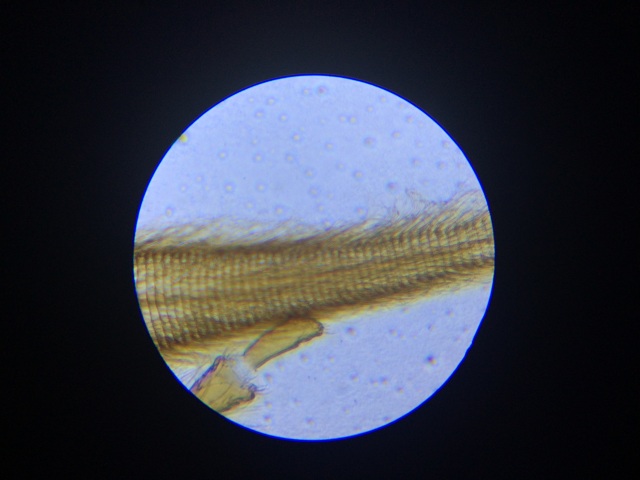 The proboscis of a honey bee 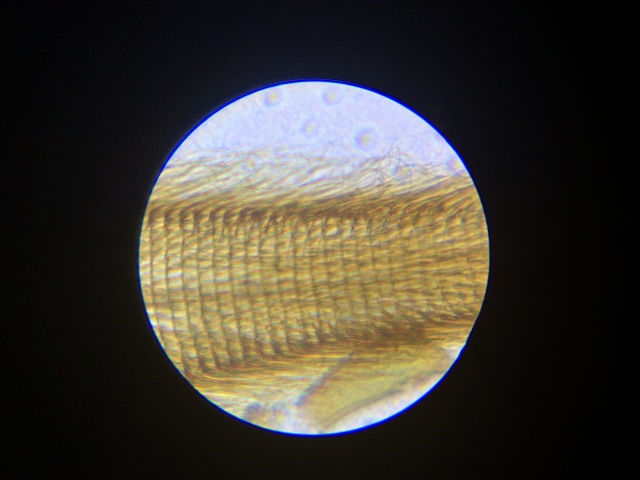 At high magnification, you can see the individual hairs

Oh well. I thought it was cool.

Maybe when she’s six or seven.