I sent my 6 year old daughter to walk around the block by herself, and nothing bad happened

We spent several days last week at my parent’s house in the town of Brighton, a suburb of Rochester, New York.  As we walked around the quiet neighborhood I grew up in, I was flooded with memories of walking around as a carefree kid, by myself.

My parents did not accompany me everywhere.  After school or on weekends, I was allowed to go off by myself.  There was a church nearby with a big parking lot and a ramp that I would ride my bike up and down.  There were neighbor kids I would play with.  I don’t recall exactly what age I started doing this, but it was pretty young. I’m pretty sure by the age of six I was out and about on my own.

My own daughter, now six, has never had anywhere near this level of independence. Partly it’s that we live in a much more urban neighborhood in Cambridge, Massachusetts, and it’s partly that kids just have a lot less autonomy now. Despite the fact that crime is down and child abductions are just as incredibly rare now as they were back then, there is much more of a sense that harm is always lurking around the corner.

My wife and I have had discussions about what age our kids should be before we send them to the corner store across the street and what they would need to demonstrate before they can accomplish this basic task.  I’ve also tried to find opportunities to teach them self reliance, like sending my daughter into the women’s bathroom on her own to change after swimming.  But even as much as I want them to be independent, they still won’t have the kind of freedom at such a young age that I took for granted growing up.

So, as I walked around my old neighborhood, it occurred to me that I had an opportunity. We were in a quiet, friendly neighborhood. There were sidewalks and good visibility. This was a pretty safe place to explore.

I turned to my daughter and said, “Do you want to walk around the block by yourself?”

She looked at me, puzzled.  “By myself?”

“Sure,” I explained. “The block is a big circle.  Just keep following the sidewalk.  Don’t cross any streets, just turn right and keep going. You will end up right back here.”

We discussed it for a while, and eventually she decided she wanted to do it. “Remember,” I said, “Don’t cross any streets. And if you get confused, just ask somebody for help.” This last part about asking for help is important to me. The “stranger danger” that is drilled into so many people’s heads can often be counter-productive. The overwhelmingly vast majority of people are friendly, and kids shouldn’t be afraid to ask.  There is a difference between good judgement and being scared of everyone. 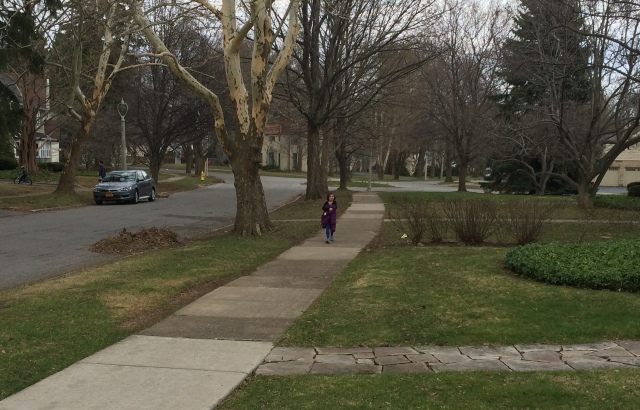 My daughter soon set off. “Don’t watch me!” she yelled back.

At this point, she turned around and started running down the block. She turned around, saw me watching her, and yelled “Don’t watch me!”  And then she continued on her way.

I stayed in the front yard, playing T-ball with my younger son, and keeping an eye on both directions.  It would have taken me 5 minutes to walk around the block, but I figured with her smaller legs and more leisurely gait that it would take at least 15 minutes. So I waited.

I’ll admit it, I was a touch nervous.  I had every confidence that she could do it and would be fine, but I still worried a little bit. My biggest fear was not her, but that someone would stop her and decide that she should not be walking down this quiet neighborhood street without a parent holding her hand.

Just when I thought she should have made it back around the corner again, I saw her re-appear from the direction she had come, walking along with a woman and her dog.  My daughter had a big smile on her face.

When she got to me, I asked her what happened… wasn’t she going to walk around the block?  She grinned and said, “I was, but then I met this nice dog and made friends.”

I eventually worked out in conversation with the woman that she had made it about 3/4 of the way around the block before meeting the lady and the nice dog and deciding to go back the other way.  The woman explained that she asked my daughter where she was going, and she explained “grandma’s house.”

Okay, so not quite what I was hoping for, but not bad either. My daughter had an “adventure” where she was in charge of deciding where to go. She made appropriate decisions, trusted her instincts, and got back home just fine.  All good lessons.