Parenting Milestone: Breaking out of a child’s irrational obsession

While my son’s 4th birthday crossed many traditional milestones, like trading in car seats for booster seats, I’m more excited about a much simpler one: he is now willing to eat breakfast with a different spoon.

For the last several years, my son has been willing to eat breakfast with only one spoon. It was plastic with a green handle and yellow polka dots. He would sit down at the table with a cup of yogurt or a bowl of cereal and ask, “Where’s my spoon!” If you tried to offer any other spoon, be it a kids spoon or a grown up soon, he would protest loudly.  “No!!! The little one!!!” 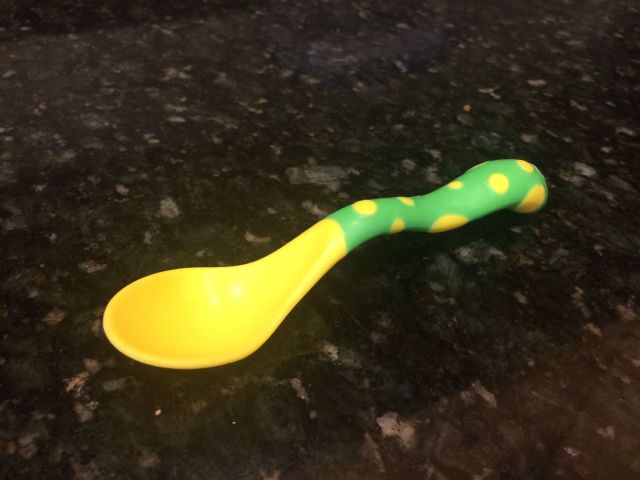 In my son’s mind, this green and yellow polkadot spoon is the only one that can be used for eating breakfast.

So, every night we would wash that spoon by hand, since we needed it to be ready for breakfast the next day. Sure, we could run it in the dishwasher, but if we hadn’t remembered to run a load that night, we would have to go fish it out and wash it by hand anyways.  This has been going on for almost two years.

Normally in a situation like this, I would simply buy a whole bunch of these spoons and stop worrying about it. The problem is that I have no idea where this spoon came from. We somehow inherited it in a snack bag mixup, and I can’t figure out where to find another one. Not for a lack of trying. I’ve tried searching on Amazon for “green and yellow spoon” but no luck. I’ve searched the kids sections of stores like Target, but no one seems to sell it.

So every night, we wash that one spoon.

I have no idea why kids form these sorts of obsessions. My son is often determined that things be “just so”, but this insistence on the spoon is not specific to him. My daughter is far more flexible, but she has made it clear to me that some things that look identical to us have tremendously important differences.

A few years ago, I bought some plastic bowls at IKEA for the kids to use. They had a flower pattern, and they cam in two identical versions with inverted colors: some had blue flowers on a while background, and others had white flowers on a blue background. I thought it would be nice to mix and match, so I bought four of each.

So, how did we break my son’s obsession with the green and yellow spoon?

A couple of weeks ago we were in Portland, Maine and stopped in at our favorite kitchen store. We always go there to see if they sell my favorite sponges (they are colored nylon and very hard to find, but they clean better than anything else… wait a minute, this kind of thinking sounds familiar… hmm…). As we browsed around while trying to keep the kids from knocking fragile items off the shelves, my wife spotted a jar filled with colored-handle spoons of assorted sizes.

Suddenly, we recognized an opportunity.  I turned to my kids and said, “Hey, do you guys want to pick out your own new colored breakfast spoons? You can each choose two.”

“Yeah!!!” they both shouted and ran over. My son was able to ride both his sister’s enthusiasm and his own excitement about getting to pick something out.  After spending a while debating the benefits of various colors, they each chose two.

When we got home from the trip, they were insisted on using their new spoons for breakfast. We hid the green and yellow spoon away, and he has never asked for it again.

I didn’t really think the plan would work, so we had only bought four. But at least I knew where to get them. On a subsequent trip to Maine over July 4th weekend, we made sure to stop in at the store and bought eight more spoons.  And there hasn’t been a debate about spoon color since.

But, sadly, they still insist that the bowls with the blue backgrounds are better.