As I was walking back to my car Thursday evening in the Whole Foods parking lot, a person pulled up beside me and said, “Hey, do you want to fix that big dent in your bumper? I could take that out for you in five minutes.”

I stared at him in puzzlement, wondering if he was trying to scam me.

I knew immediately what he was talking about, however. Last winter, I discovered that our Honda Civic had a massive dent in the front right corner bumper. Neither my wife nor I had any recollection of how it got there, but it looked like it had either hit a snow bank or the curb.

In theory, it was something we should fix, but it was the thing I never got around to. Taking the car to the auto body shop is a major hassle, both in terms of time and expense.  While the dent was pretty major, it was still just cosmetic. We live in an urban environment, and bumps and scratches are just a part of life here. If it’s cosmetic, I don’t normally bother.

However, the damage was slightly more than just the dent. The right and left sides of the bumper seemed to have somehow popped off their clips. They weren’t hanging off, but they clearly weren’t quite attached the way they were supposed to. I would periodically shove them back in, but they would soon be sticking out a quarter inch again after a few days. It didn’t cause any problems and did just fine on the highway, but clearly it wasn’t good.

But, I’ve never bothered to do anything about it, so the problem has persisted for 8 months. So when the guy offered to fix the dent for me right there, I was unsure.

“Look, I’d be tempted,” I said, “but I have a trunk full of groceries, I still need to grab something from RiteAid next door, and my wife is waiting for me.”

“Trust me, it will take just a moment. I guarantee you I will have it fixed before you come back out of RiteAid. I have everything I need in the car, and it will cost you a fraction of what you would pay at an autobody shop. My name’s Mitch, by the way.”

I decided to take the risk. We quickly negotiated a price, and I went into the store. Five minutes later, I came back out, and he was standing next to the car. The massive bumper dent was indeed gone.  I was shocked.

He then mentioned that he was looking at the car more closely and noticed the bumper was popped out on the sides, and there were a ton of scratches on the back bumper, which also was not hanging quite right either. He could fix the broken clips of the bumper and had Honda factory paints to touch up the back.  It would just take him 15 minutes, if I was interested.

Well, now I was interested. The unclipped bumper had been bothering me, and he did a great job on the dent, just as quickly as he said he would. But, I had a trunk full of groceries and my wife was waiting for him.

“No problem”, he said.  “Do you live around here? I’ll come with you and fix it in your driveway.” It turns out his father lived right around the corner from my house, so we agreed. He parked next to our house and started to work on the car after I had unloaded the food. 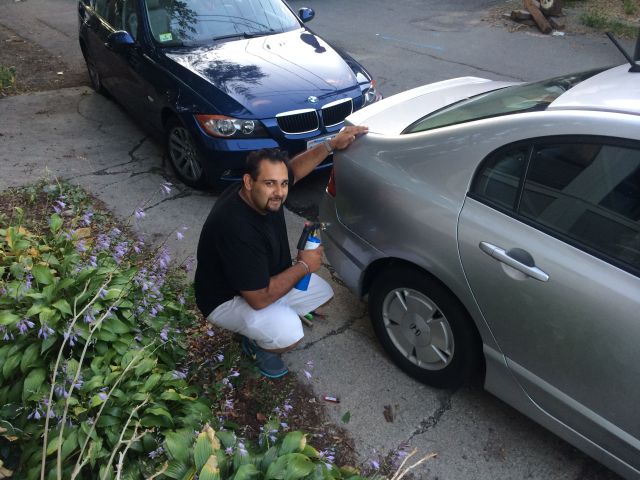 Mitch fixed the dents, repaired the detached bumper, and touched up the paint, right in my driveway.

15 minutes later, he was doing the last touchups with a blowtorch to seal the new bolt. The car was looking much better, it had cost me zero hassle, and was much cheaper than taking it to a shop.

I chatted with him a bit about his business. As a kid, he had grown up hanging around his father’s auto body shop and knew a lot about cars. In college, he studied civil engineering and architecture in college but wasn’t able to make a career out of it during the recession. Then, when his car was damaged in a hail storm and he had a shop specialist take out all the dents, it occurred to him that he knew how to do everything this guy did, and he had a brainstorm for a new business idea.

Mitch now runs a mobile auto body shop repair service.  His business has no garage (and so very low overhead), and he has a couple of guys who go around to different locations and do repairs on site. He has arrangements with many businesses to do as-needed touch ups on their trucks and vehicles, including the Whole Foods where I had met him.

At any rate, I was very impressed.  He was friendly, not pushy, his rates were good, and having the auto body shop come to you is extremely convenient.

3 Responses to An auto body shop that makes house calls