Posted on December 14, 2014 by jrothmanshore

This morning, I needed to make a trip to the Home Depot to pick up a dehumidifier and some other supplies.  My older daughter was having a playdate with some friends, and I needed to coax my younger four-year-old son into coming with me so that he wouldn’t disrupt them.

What can be more exciting for a young boy than going to the hardware store to buy a dehumidifier, right? My son was not particularly interested.  However, I am not above bribery. I casually suggested that perhaps we could find a toy tool for him while we were there, and he perked right up.  Within minutes, he was getting dressed and ready to go.

My son loves to build, and he treasures a set of plastic Black and Decker tools given to him by his aunt and uncle. Whenever I have a project to do around the house, I suggest he “help” me with his own tool set.  I will give him “turns” with his screw drivers and wrenches, and generally I am able to hold his interest long enough to get the job done.

Over the last year or two, some of these plastic tools have become lost or broken, and having another gadget wouldn’t hurt either. I just assumed that Home Depot would sell these things, since it aligns so well with the rest of their merchandise. Right?

Not so much. When we arrived, I asked if they had toy tools for kids. The greeter started to walk around some of the bargain tools at the front, suggesting real hammers and wrenches, but this wasn’t what I had in mind. While my son is capable, I am not about to give him a metal hammer to whack things with.

We made our way down to the hardware section, assuming that we would pass some end cap with a display of toy tools for kids, but there was nothing.  There were endless aisles of power tools, but no toy versions.

Frankly, I’m rather incredulous. I was not the only parent with a young child in tow. Home Depot even has a set of special carts made to look like race cars for young kids. How are they missing this mark opportunity?  They clearly know parents shop their with kids. Along with the Christmas decorations we passed a selection of toy cars and remote controlled helicopters.  But no tools.

If I were Home Depot, every major department would have a small display of cheap plastic tools for the kids. Hardware? Screwdrivers and toy hammers. Wood? Saws and pretend boards. Plumbing? Wrenches and tubing. Winter gear? Kids shovels… the list is endless.

Because here is the thing: trying to do any home repair job with a kid is a challenge. Parents are desperate for ways to keep their offspring occupied while they try to get the job done. Home Depot could be marking these products up 50% and parents would still pay when they see a great opportunity for a distraction.

My son was obviously disappointed, so I gritted my teeth and drove across the street to Target. Sure enough, I found a Black and Decker construction set that came with a plastic screw driver and five projects that could be assembled by kids age 3+. 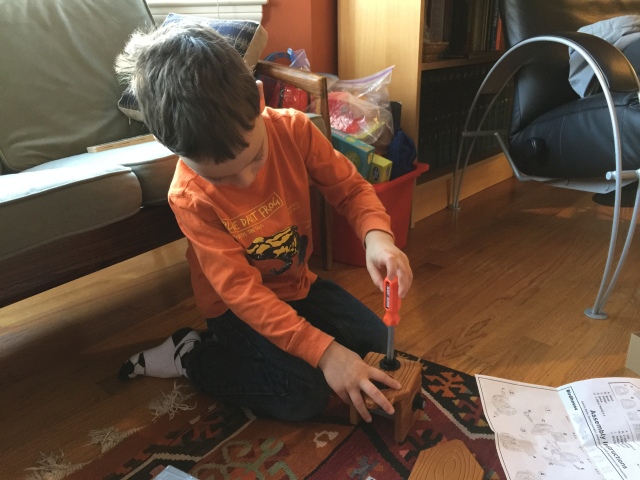 My son loved putting together a small plastic birdhouse with this “tools”.

My son loved it.  While I set up the dehumidifier and reorganized the basement, he built all five of the possible projects using his plastic screw driver.

Home Depot, that $19.95 I spent at Target could have been yours!

This entry was posted in Uncategorized and tagged family, marketing, parenting, toys. Bookmark the permalink.