When I was in first grade, my class had an Apple II in the classroom for a month or two, and we were all able to take turns making pictures using a program called Logo. There was no mouse on this computer, so to draw a picture, you needed to give instructions by controlling a pointer called the “Turtle”. You could move it forward and turn it right and left.

For example, to draw a square, you would give these series of commands:

The FD command would move the turtle forward 10 units, then the RT would turn the turtle right 90 degrees. As it would go, it would draw a line.  You can try it online at this Logo website.

This simple program draws a square by repeatedly moving forward and turning right.

Logo has other commands that allows you to control the color of the line or turn the pen on and off. You can also create functions to repeat steps of command. So, by adding a 10 degree turn to the instructions for a square above and repeating it over and over, you can create a geometric  shape:

By repeating the square instructions over and over but adding a ten degree turn after each one, you can create geometric shapes in Logo.

I remember working quite hard on drawing a picture of the space shuttle on the Apple II. What I didn’t realize at the time is that I was learning my first programming language, which turned out to be a very valuable skill in my career.

Nowadays, with iPads and touch screens, it’s hard to get kids interested in the idea of drawing with Logo. They are used to something which much more immediate feedback. I’ve tried showing my children Logo programs, but they don’t see much appeal.

However, my four year old son really likes board games, and a friend mentioned that her kids really like a board game called Robot Turtles. I bought it on her recommendation, and it turned out to be a huge hit.

The board is set up as a grid, and the turtle can move forward or turn right or left.

It comes with a series of obstacle cards, and so you can set up the board to be as simple or as complicated a path to the goal as is appropriate for the child.

No reading is required for the child. They lay out a series of cards to move forward, turn right, and turn left to get the turtle to the goal. 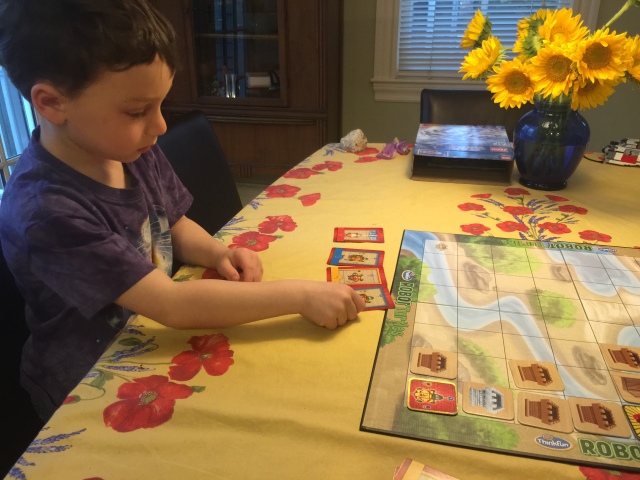 The child lays out a series of cards to move forward and turn right or left to guide the turtle to the goal.

You move the turtle based on the cards the child lays out (they encourage you to make funny sounds as you go), and the child gets to see what works and what doesn’t. Then they can make corrections.

The game adds a bunch of additional options to make it more challenging. There are “frozen” blocks that must be melted with a special “laser” card, and then there are movable blocks that can be pushed. This allows you to create increasingly challenging puzzles along the lines of Sokoban.

They also have a “function” card for repeated commands, but in my opinion I think this was too much of a stretch.

My son really loved this game. For days, he would ask every babysitter and adult he could find to please play Robot Turtles. And I have seen that he has really internalized some of the ideas. If you ask him, he is able to articulate his “plan” in a series of steps that are thought out ahead of time.

This entry was posted in Uncategorized and tagged family, home technology, parenting, Programming. Bookmark the permalink.