The story of the spider and the centipede: who does a kid take after?

Posted on November 9, 2015 by jrothmanshore

Regardless of where you come down on the nature-versus-nurture argument, one thing is very clear: in many respects, kids are a lot like their parents. They have half your DNA and have spent their entire lives with you, and it’s only natural to see a behavior and say, “She get’s that from me,” or “That comes straight from my spouse.”

While in theory it should be a 50/50 split, with traits evenly appearing from both parents, many times it feels like a child takes more after one parent than the other.  In our family, we often joke that our seven-year-old daughter Ayelet takes after me, and our five-year-old son takes after my wife Aviva.

Ayelet has my darker brown hair, and just like me, she is a total mess in the mornings. I solve this problem for myself with coffee, but she’s too young. I’ve seriously wondered whether we could start her on some sort of placebo in the meantime.

Ayelet is also a total carnivore. She loves meat in just about any form, and one of my favorite things to do is take her out for her favorite – lamb chops – when we find ourselves in New York City with access to kosher restaurants. 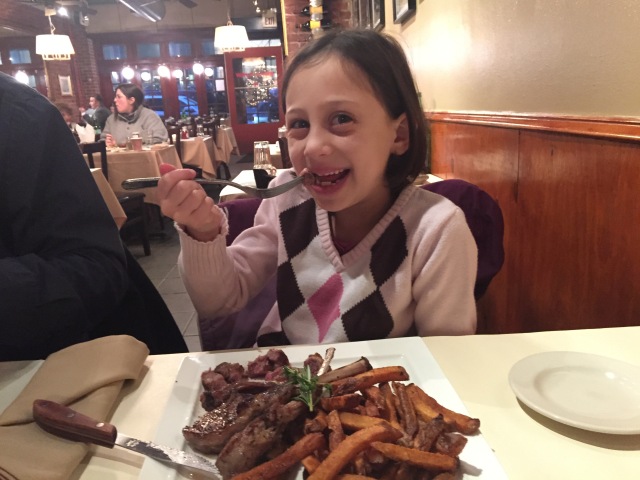 Rafael, on the other hand, has my wife’s sandy brown hair, and he perks his head up at 6am,  ready to go for the day. He hates being dirty and likes to keep everything organized and arranged just so. Unlike his sister, he refuses to eat any form of meat other than hotdogs. When I first met my wife, she was a vegetarian, although she has since grown to appreciate a nice buffalo steak.

Of course, comparisons like this are silly, since I can point to lots of traits where Rafael takes after me and Ayelet takes after my wife. Just to name a few… Rafael can never remember anyone’s name and constantly refers to people by the wrong one, just like me.  Ayelet is extremely social and loves to engage with people, just like my wife.

And of course, there are traits that come from neither of us.  They are both athletic and have taught themselves all kinds of crazy tricks on the monkey bars and rings. I sometimes joke that they might be the mailman’s kids.

But still, some parallels are so strong they cannot be overlooked.

Aviva and I have some very clear separation of duties in our family.  I deal with vomit and broken glass.  Aviva handles blood and clipping kids’ fingernails.  I kill and dispose of any animal that enters our home or property that has four legs and under (basically, I kill any mice), and Aviva kills anything that has six limbs and higher (bugs and spiders are her job).

The other night, I needed to rehang something on the wall and went down to the tool shelf at the bottom of the basement stairs to get a hammer. Ayelet had followed me down to chat about something and was standing a few steps from the top behind me.

Suddenly, I heard my daughter scream with the most violent terror I have ever heard in my life.  I was convinced that something horrible must have just happened to her – perhaps she had stepped on a nail or stabbed herself. I immediately turned around and gathered her in my arms and carried her back upstairs.  She was sobbing uncontrollably. At the same time, my wife had bolted down from the second floor to see what terrible tragedy had befallen her.

Between the sobs, we finally coaxed out of her what had happened.  “I…saw…a… centipede!” she croaked.

Yes, even in a house as clean as ours, there are some bugs living in the basement.  Some of them have an obscene number of legs, although I don’t know that they are actually centipedes.  They creep me out, but I accept the fact that they get to live in the basement where it’s dark.

When a bug ventures upstairs, however, I’ve been known to screech, just like a little kid.  Aviva has to come from wherever she might be in the house and dispose of it.  Yes, Ayelet definitely takes after me.

Rafael on the other hand…

A few weeks ago, some friends were visiting, and we had four kids in the living room.  One of them looked down on the floor, pointed, and said, “A spider!”

I’ve never seen kids move so fast.  Kids went running off in terror in all directions.  One jumped behind the couch.  Another kid hid behind her father. A third ran for the corner. I saw Rafael bolt out of the corner of my eye towards to the kitchen.

I sat there, considering what to do. Aviva was out of the house, so it was going to fall to me and my guest to dispose of the spider. Just as I was about to look closer to try to come up with a plan of action that might – heavens forbid – involve getting closer to the spider, Rafael came running back into the living room.

He took a flying leap and sailed three feet to land with a resounding thud next to where the spider was.

“I’ve got it!” he yelled, and with a tissue in his hand, slammed it down on the spider, squashing it.  He scooped it up and then ran back to the kitchen to throw it in the trash.

While every other kid had fled in terror, Rafael had immediately jumped into action.  He wasn’t running away from the spider… he was running to the kitchen to get a tissue so that he could come back and kill it.  He didn’t even miss a beat.

Definitely Aviva’s son.  I would never do that.

This entry was posted in Uncategorized and tagged bugs, family, genetics, parenting. Bookmark the permalink.

2 Responses to The story of the spider and the centipede: who does a kid take after?