Answered: What is the project at the Artesani Playground on Soldiers Field Road?

Posted on February 28, 2016 by jrothmanshore

Over the last few weeks, crews have shut down the parking lot at the Artesani Playground on Soldiers Field Road in Brighton, a neighborhood in Boston.  It is the most bizarre system of giant rubber tubes that seem to be filled with water: 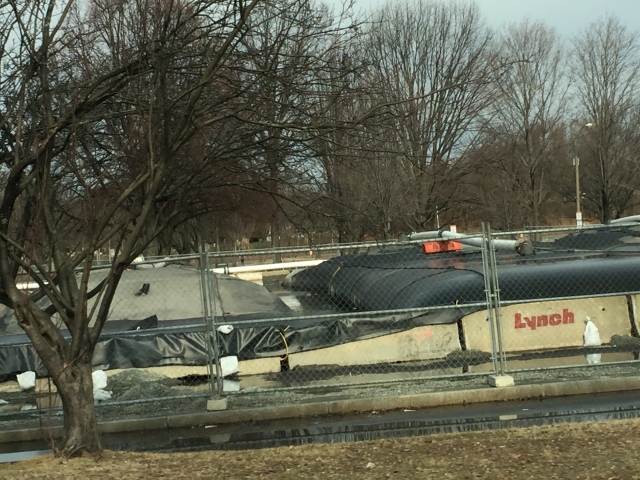 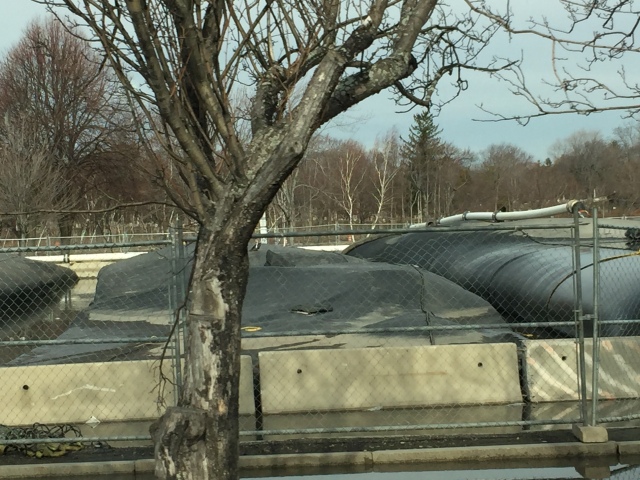 My original theory was that they were preparing a new snow farm to collect and melt snow. After last year’s historic winter storm, the city used this parking lot as a place to dump snow, and then they spent months trying to melt it all.  I thought that perhaps the idea would be to pile snow on top of the tubes and then heat it at the bottom, but it seemed awfully late in the season to set it up, and we’ve had very little snow.

And then, when they inflated the tubes, it became clear that this project had nothing to do with snow, but I couldn’t figure out what it was. A google search didn’t turn up much either, and inquiries on social media mostly turned up other people wondering the same thing.

Since I always need to know how something works, I did some more research and figured I would share my results for other curious folks.

I finally found one obscure reference, tying it to a project to dredge the Charles River.  From a DCR press release:

Beginning on Tuesday, January 26, 2016 and continuing through Saturday, April 30, 2016, the Department of Conservation and Recreation (DCR) will be closing the parking lot between Artesani and Herter Parks on Soldiers Field Road in Boston to accommodate the Charles River Dredging Project. The parking lot will be off-limits to the public for parking during this time.

Okay, great. But what the heck were they doing?  What was the function of this elaborate contraption of rubber tubes and pipes?

Over the weekend, I went for a run along the Charles River, accompanied by my kids on their bike and scooter.  At the halfway point, we stopped at the Artesani Playground, and while my kids pretended to be monkeys playing on the jungle gym, I walked over to chat with a few workers who were checking out the tubes.

The men explained to me that this is an elaborate water filtering system.  Apparently there is a culvert up stream that dumped a large amount of silt into the river. The dredging project is trying to clear out this sediment, and to do it they have set up a pumping station that is sucking up the silt and sending it down a pipe in the river.  The pipe emerges here at the Artesani parking lot, where it enters this series of tubes.  The tubes separate out the water from the sediment, and then they pump the cleaned water back into the river.  When they are done in a few months, the tubes will be full of the sediment, the water will be preserved, and the river will be clear.

I have to say I have never seen anything quite like it. Sure enough, if you stand by the “intake” tube, you can hear rocks and other sediment flowing through the pipe, while the “outtake” tubes just sound like water flowing, so it seems to be doing its job.

I dug a little further, and found some more details about the source further up the river.  It is coming from a placed called the Faneuil Brook Outfall, and this project was put out for a bid for around $500,000.  I haven’t figured out exactly where the Faneuil Brook Outfall is, but I think I drove by a pumping station just a quarter mile or so upstream.

I did also find a posting from 2012 by a DCR intern named “Evan” describing a problem with a sandbar being created at the Faneuil Brook outfall:

Outside of the office, I investigated the subwatershed for pollution and sediment deposits that could end up in the Charles River.  A growing concern in the river is a sandbar that is forming and growing near an outfall from Faneuil Brook.  I went into the field yesterday in order to attempt to establish any major sources of pollution or sediment deposits.  Driving down the streets, I took pictures of sites that may be improved or be a source of pollution.  Fortunately, I did not find any major sources of pollution or what could be supplying additional sediment to the sandbar; unfortunately, I could not find a cause of the deposition for us to implement strategies in order to stop from continuing.

My daughter is worried that this is actually some kind of elaborate plot to pollute the river, since she sees the water flowing back in and is convinced it must be harmful chemicals. I keep trying to reassure her that I’m sure the DCR knows what it is doing and this is just clean water.

She seems unconvinced. But I feel much better, having solved the mystery.

This entry was posted in Uncategorized and tagged family, mystery, plumbing, social media. Bookmark the permalink.

1 Response to Answered: What is the project at the Artesani Playground on Soldiers Field Road?