Posted on December 13, 2010 by jrothmanshore

As much as I enjoy gadgets and playing with new technology, I always find myself a little behind the curve on the latest trends.  When blogs first became popular four or five years ago, I was skeptical.  I remember the VP of product management at the start-up I had helped found had created a blog for the company, and he wanted everyone to post.  I just couldn’t wrap my brain around why anyone would want to post, or why anyone would bother to read it.  Later, in an effort to understand them better, I tried keeping my own personal blog as an experiment for a few months.  While it didn’t hold my interest at the time long enough for me to stick with it, it helped me “get it” as a new communication medium.  I’ve spent the last four years trying to convince my father to start a Galapagos blog.

Experimentation has been my general approach to any new trend or technology that I don’t understand.  My twitter posting started as a way to try to understand why so many people, including some of our clients, were so excited by the idea of broadcasting 140 character statements to the world.  After a few days of tweeting I quickly grasped the power of a platform to casually share and receive links of interest with a broad audience, and I was quickly hooked.  Facebook, my return to the Macintosh, graphic editing with GIMP, and many others have followed a similar pattern.

The latest trend that has baffled me is the concept of location-basd services like FourSquare and Facebook Places.  While I have been feeling like I should try experimenting with them, I just haven’t figured out how to get going.  I don’t frequent many coffee shops, and with two young children, we aren’t going out to many concerts or bars.

Thus my surprise when my almost three-year-old daughter led me to an epiphany today.  It was pouring rain this afternoon, and after a napping failure, I needed some sort of diversion.  Leaving my wife and baby at home, I took her to the Boston Museum of Science.  She had a blast; while she is too young to understand the exhibits, she loved looking at the dinosaurs, pressing all of the buttons, and running around the exhibits.

While it might arguably make me a bad father, she was entertaining herself enough for me to take a peek at Facebook on my phone.  To my amazement, right there in the news feed was a location check-in at the Boston Museum of Science from some friends of ours (@meyerpotashman) who have a son almost exactly the same age as my daughter.  A few quick phone calls later, and our kids were jumping in and out of an Apollo 11 capsule.  We soon stumbled upon another friend whose son is in the same preschool as my daughter, and before we knew it, a whole group of kids were running around and entertaining each other. 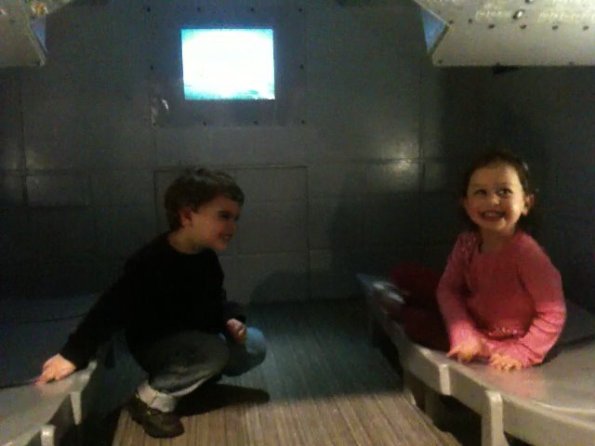 While I don’t understand the value of becoming the “mayor” of a coffee shop, I see the benefits of location-based services for the toddler crowd.  On many random sunday mornings we have expressed delight to unexpectedly find ourselves at the same playground as friends or disappointment when another family is not available for a play date on a rainy day.  How convenient it would be to be able to say, “who is playing in the neighborhood”?

This is a location-based service that I get.

This entry was posted in Uncategorized and tagged family, location services, social media. Bookmark the permalink.