If you check-in your location on Facebook that you’re at the hospital, it probably isn’t that serious

Today started innocently enough. Our 16-month-old son, Rafael, was kind enough to sleep until 6:30 am, and his sister Ayelet slept until 7, so everyone was in a good mood and had a good morning.  We had plans to meet some friends at the Boston Children’s Museum, so it was looking like it would be a good day.

About five minutes after we entered the Children’s Museum, Rafael was having the time of his life going down a slide in the golf ball room with another boy his age.  He went around again for another ride, but this time he landed a little hard and started bawling.  I scooped him up and tried to distract him with other activities.
Normally when Rafael injures himself, he is up and moving again in a minute or two.  He has always been physically active (he was walking at 10 months), but he was having a little trouble bouncing back.  I started to check him out, poking at his feet, legs, arms, everywhere, and nothing seemed to bother him.  Neither of his feet seemed swollen.  He just wanted to be in my lap and refused to get up.
It was getting late in the morning and I figured he was just overdue for a nap, so I tried some other areas to see if he would perk up.  He wasn’t unhappy and would periodically smile at other people, but he would start crying every time he got up.  To look at him, you wouldn’t think anything was wrong, other than the fact that he wasn’t walking (Rafael is the boy in front): 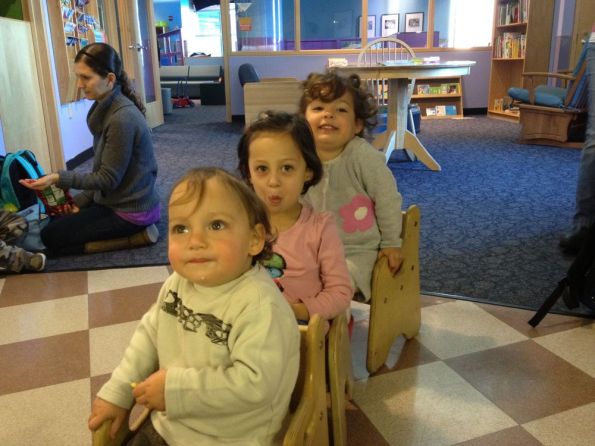 I tend to be a fairly relaxed parent, however the fact that he was crying every time he stood up more than a half hour after the incident was starting to worry me.  Poking him still didn’t show any pain, but now one foot was starting to potentially look a little swollen.  Another parent tried bending his foot, and that started him crying immediately.
Okay, at that point even I agreed that we had better head to the ER.
My wife and I soon found ourselves sitting in a pediatric examining room at the Cambridge Hospital emergency room.  Ironically, it was the exact same room that we were in a few days after Rafael was born when he had become dehydrated. 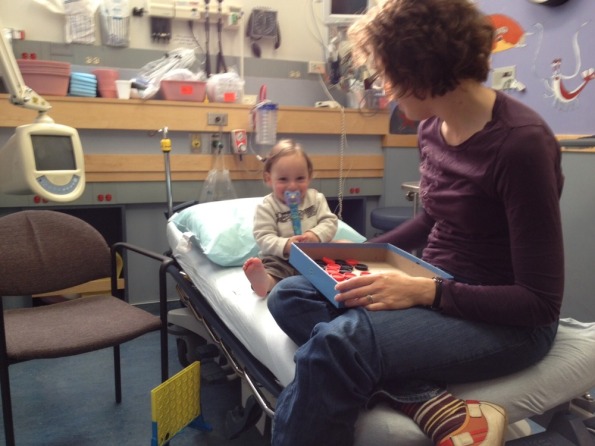 We could generally coax him into a fairly chipper mood, playing with a Connect Four game (excellent for toddlers working on their fine motor skills), but he did not take kindly to being examined.  While I usually try to keep him away from electronics, he was pretty excited by the Bubbles game on my iPhone.  I don’t know that the hospital workers were particularly thrilled with this technique, but desperate times call for desperate measures.
After a brief examination, the doctor said we were going to have to get an x-ray.  We asked how one goes about getting a 16-month-old to sit still for an x-ray, and we were assured that the radiologists have their techniques.
Well, it turns out that the radiologist’s technique is to put a weighted blanket on the child and then have a parent hold the kid down while he screams.  This has to be repeated six times with the leg held in various angles.
My wife and I have some pretty clear divisions of labor: she handles clothing selection and hair braiding, and I handle vomit and broken glass.  Holding a kid down for an x-ray didn’t clearly fall into either category, but after a quick, non-verbal conversation, we agreed that I would be holding him down.
To the radiologist’s credit, he was very quick, and it only took about five minutes.  While Rafael yelled, he pulled through in the end, and ten minutes later he was smiling, eating a chocolate cupcake (tip for parents visiting the ER: bring a couple of food treats for post examination times).
The initial diagnosis from the x-rays was a very minor fracture called a buckle fracture, where the bone hasn’t really broken but is slightly bent.  It was near the bottom of his tibia, which is why he was unable to stand on it.  We would need to follow up with a orthopedist in the next day or two to confirm, but in the meantime, whe would need to wear a splint and not walk on it.  Try to convince a 16-month-old who has been walking before he was one year old not to stand up…

Once the splint was on and we were waiting for discharge, it was time to start letting family and friends know what was going on.  Aviva started to call and email, and I decided to go for broke and just post it on Facebook.  I’ve travelled far from my initial skepticism about location-based services, and so I proceeded to check in at the hospital.  Oddly enough, Cambridge Hospital did not appear on the “Nearby” list.  I guess very few people bother to actually check-in at the hospital.  I typed it in manually instead in order to find it.
To my surprise, less than a minute after I had posted our location, I started to receive text messages in the vein of “Are you all right? What happened?”  I couldn’t imagine that so many people were actively watching Facebook on a Sunday afternoon, but I vaguely remembered that Facebook will send location-based notifications if someone checks in near you.  We were at our local hospital, so we had friends all around the vicinity.
I proceeded to assure people that everyone was okay and share some of the pictures of Rafael with his cast.  To me, it was obvious… if you were going to share your location on Facebook that you were at the hospital, it probably isn’t that serious.  When I spoke to my parents a little later, they sounded pretty traumatized.
It’s just a broken leg.  Okay, that does sound a little serious I guess.  But it really doesn’t faze me.  He’s not actively in pain as long as he is not standing.
How I’m going to convince this little guy to go back to crawling for the next few weeks has me much more concerned.

This entry was posted in Uncategorized and tagged family, iPhone, location services. Bookmark the permalink.