As the kids have moved into toddler age and beyond, I find myself with more opportunities to read here and there.  I can work through a New York Times article in between mopping up my 1.5 year old son’s spilled cereal bowl, and I can even read a few pages of a novel while I sit with my four-year-old daughter while she is in the bath.  Since these reading opportunities are still unpredictable, most of this reading takes place electronically on my iPhone or iPad.

Unfortunately, this creates a bit of a self-destructive cycle.  While the iPhone and iPad are great for scanning through New York Times articles or reading my book, they are like addictive magnets for the kids.  If my son catches me using the iPad in his presence, he immediately drops whatever he is doing and starts grabbing for the device (after giving it to him a few times and him getting upset, I finally discovered that he didn’t want to actually use any apps – he just wants to scroll the home page screens of icons back and forth endlessly).  My daughter will start asking to watch a video, and before you know it, their previously independent play has stopped, and I have lost my chance to read.
A few weeks ago, as I was furtively reading The Girl with the Dragon Tattoo in a corner, it occurred to me that perhaps a Kindle would be the solution to my problems.  It’s a highly regarded ebook reader, and the kindle app is compatible on my iPhone and iPad, meaning that I could move between the Kindle and the iOS devices seamlessly.  It also has an experimental web browser would would allow me to scan New York Times articles.
But most importantly, a Kindle is otherwise completely boring.
No touch screen.  No color.  No sounds.  No “swish” of the inertial scrolling.  It doesn’t do much of anything other than display text.  Just a plain unremarkable gray slab.  It would allow me read the material I wanted, but it might avoid the “drug addiction” effect that the Apple devices have on my children.
I picked up the introductory ad-supported Kindle is only $79 after the kids were in bed last week and set it up.  It connected to my wifi network (although there seem to be some intermittent issues due to Kindle connectivity problems with Apple’s Airport Express), and I verified that I was able to use the mobile version of the New York Times website.  I also loaded a book, confirmed it worked, and decided it was worth a gamble.
The next morning when the kids got up, it was time for the all-important test.  I sat down next to my son as he started eating his cereal and started reading the times on my Kindle.  He soon spotted that I had something new and reached out for it, so I handed it to him.  He turned it over a few times, made a few excited grunts, and then started pushing a few of the buttons at the bottom.  Not much happened.  After a minute or two of this, I asked for it back, and he gave it to me.  He then resumed eating his cereal and let me read in relative peace. 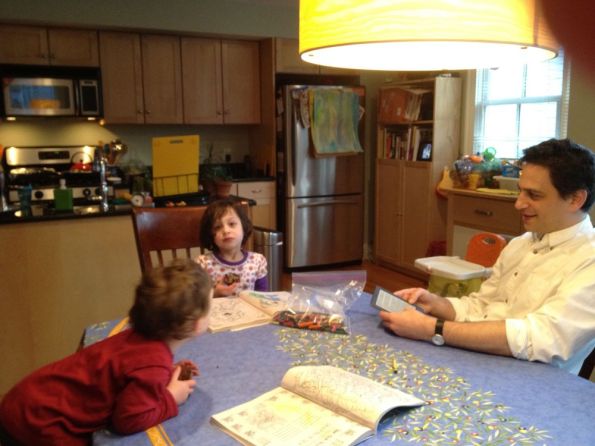 Success!  My daughter had a similar reaction, and I have had quite the reading-filled weekend.  I’ve made it through many of the top stories in the New York Times, and I read about a quarter of a scifi novel that I had been interested in.
As a web browser, the Kindle is just functional enough.  While The New York Times charges separately for a true Kindle subscription, they don’t block the Kindle web browser from visiting their mobile site (mobile.nytimes.com).  I am able to log in with my print subscriber account for full access, and the articles present quite nicely.  I’m able to browser the top stories, look through the “Most E-Mailed” list, and scan the paper sections. 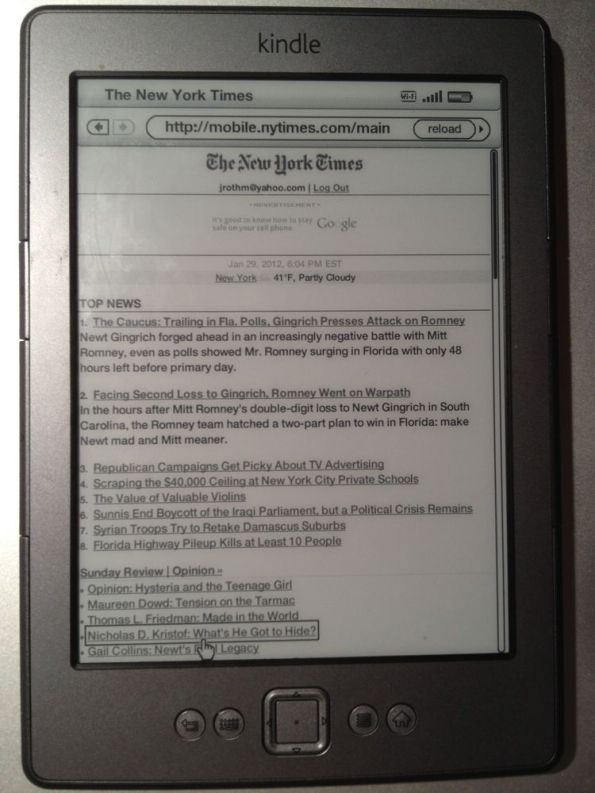 Granted, it’s a far cry from browsing the times on the iPad.  You don’t get the “first paragraph” introductions to articles and color photos that are often key to hooking you into an article, and there is none of the effortless “swiping” through the different sections.
But on the other hand, my kids actually let me read it this way.  In the land of the blind, the one eyed man is king.