Yesterday on the way home from work, I was rear-ended.  I stopped at a light when I realized I was not going to make it before it turned red, and the driver behind me was hoping to follow me through and clipped the corner of my car.  We were both fine, but the right rear corner of my car was pretty smashed up. 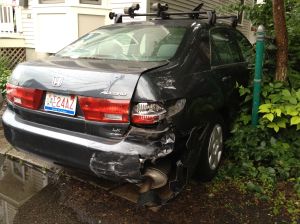 Since I’m not at fault, my insurance company is waiving the deductible.  However, part of me is wondering whether I should consider using the opportunity to upgrade from the seven year old Honda Accord to my latest fantasy car – a Prius V.

Our other car is a Honda Civic hybrid, and it’s our main driving vehicle due to its excellent gas mileage.  We use the Honda Accord when we need to bring a fifth person, since two car seats in the back of the civic only leave about 8 inches of additional space.  I’ve often fantasized about having a larger car that still earned excellent gas mileage, so ever since I saw the Prius V’s full size and excellent 44/40 gas mileage, I’ve been kind of tempted.

Actually replacing the car doesn’t make much financial sense, but out of curiosity, I decided to inquire about how a trade in process would work.  Would I need to have the Accord fixed before trading it in, or would they take it as is?  I started looking around the Toyota website when I was prompted for a “Live Chat”.

My last experience with using a live chat was Verizon’s about 18 months ago, and it was pretty dismal.  Whatever was at the other end wasn’t able to answer even basic questions, making me doubt whether I was really talking to a person at the other end, but I figured I would give Toyota’s a try.  I hit the button to initiate a live chat and then typed my question.  The system paused for a moment, then informed that I was talking to “Andrea”.

Okay, so far, so good. It would make sense that they wouldn’t make the actual connection until I typed a question and showed I was “committed”, so the pause gave me confidence I was being connected to a real person.

I started to explain that I wanted a trade in, and “Andrea” sensibly asked what make, model, and year my car was.  I provided this information and then proceeded to ask about whether I needed to have it repaired first.

At this point, “Andrea” started to make a lot less sense.  When I explained that the vehicle was drivable, she paused and then said that she wasn’t sure of the details.  She then offered to have someone get back to me with more information over phone and email. 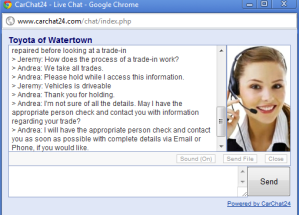 At this point, I’m not sure who I was talking to, but it clearly wasn’t a trained customer service representative. My questions were about some of the fundamentals of a trade-in, and I would expect anyone who was familiar with the process would know the answer.  How could they need an expert here?  At the very least, I would expect a real person to ask a clarifying question or two before stating they needed to go to a higher authority.

One possibility is that I was talking to a non-English speaker who was working from a list of common questions and answers.  However, I suspect that more likely, this was an intelligent chat bot that was trained to handle various common questions, but the moment someone goes off script, they have to kick off to a real person.

I understand that it’s not very cost effective to have a crew of people sitting around to answer “live chat” questions, but if all they are going to do is generate canned responses to questions, why bother?  All this does is leave a bad taste in mouth, since the company is damaging their credibility.

If they are lying about the “live chat”, what else are they lying about?  Perhaps the gas milage?

This entry was posted in Uncategorized and tagged customer service. Bookmark the permalink.