When flying with young children, make sure to bring a landing treat

We recently took a vacation out to San Francisco with our two young children, ages 2 and 4.  While we were excited for the trip, we knew that getting there and back was going to be tough.  There is just nothing about flying with young kids that is easy.

Ourfour-year-old daughter does okay, since she has a long enough attention span that she will happily watch television on the iPad for a couple of hours, especially since we would never let her watch that much in a row at home.  If it keeps her occupied, quiet, and in her seat for a long stretch of time, I’m all for it.

Our two-year-old is much tougher.  What he really wants to do is run around and jump, and that just doesn’t work for a 6 hour flight across the country.  He still isn’t at the point of really being able to sit and watch a tv show, so it’s a much more arduous task to keep him occupied.  We pack lots of activities (books, a portable train set, playdoh, crayons, etc.), and then we have to work as a team to try and keep him engaged and hope we brought enough diversions.

By the end of 6 hours, both the little one and the bigger one have had enough.  They want nothing more to get off the plane and move around.  And this is when the flight attendants announce over the loudspeaker, “Please fasten your seat belts, turn off all electronic devices and return your tray tables to their upright positions.”

Ugh!!! Just at the moment where you are desperately trying to keep the kids occupied and not have a hissy fit, the vast majority of your options for keeping them distracted and engaged are no longer available.  No more electronics.  No more walking up the aisle to stretch their legs.  No more coloring on paper using the tray table.

Grown-ups can still read a book or magazine, but for the kids, their patience is now shot.  Pulling out a book and trying to read to them isn’t going to get you through the 25 minutes between the announcement and when you are on the ground and parked at the gate.

Landing treat is a secret weapon that never appears until you enter the “no electronic devices  or tray tables” zone.  It’s the ultimate bribe that will keep the kids seated calmly, patiently, and quietly.  For us, it’s Mike and Ike’s. 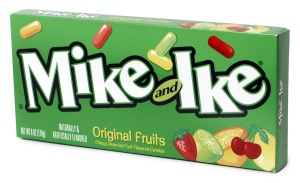 While we are far from being anti-sweets zealots, our kids hardly ever get treats like Mike and Ike’s (not judging you if you do – every parent does what works for them).  A chance to eat  these colorful little sugar candies is a special occasion.

Once the landing process beings, we take out “landing treat” and start to dole out the Mike and Ike’s… v-e-r-y…. s-l-o-w-l-y….  A kid gets exactly one Mike and Ike at a time, and they must be sitting in their seat with the seat belt on.  Before they can get another Mike and Ike, they must show us that they have finished chewing and swallowing the previous one by opening their mouths wide.  They sit there, carefully the candy, and then hold out their hand, pleading for another one.

The key here is a well-known economics principle called “artificial scarcity“.  Sure, they are a rare treat, but if we gave each of them a package, we would only get about five minutes out of them.  The kids would just sit there popping them in their mouths and get bored.  By tightly controlling the supply, we make them much more desirable, and the effect lasts much longer.  Mix it up with some commentary about what is going on outside the window (ooh!  look at the flaps on the wing… ooh! look, you can see the teeny tiny cars…), and you can make it the whole way through landing without a temper tantrum.

As always, your success with a technique like this may vary widely, depending on the personalities of you and your kids, but it is definitely worth a try.

Do your kids already get Mike and Ike’s?  Or are you opposed to them on principle?  Here are a couple of other suggestions:

Lolly pops and bubble gum are also worth considering, although it is harder to create the artificial scarcity effect since they last longer, which means your kids will lose interest in getting another one more quickly.

This entry was posted in Uncategorized and tagged family, parenting, travel. Bookmark the permalink.