In the past week 10 days, I have had to work with customer care at both Amazon and Apple to replace malfunctioning hardware.  These two companies represent two extremes of how to interact with customers, and I was expecting very different levels of satisfaction.

At one end, Apple has used their 363 brick-and-mortar stores to create an ideal retail experience where customers can interact with products and receive in-person tech support.  At the other, Amazon lacks any physical retail locations at all, directing all customers to the website (and phone, if necessary).

Yet, despite these diametrically opposed approaches, both companies managed to deliver excellent service and keep me as a very happy customer.  Each one has leveraged the best aspects of their infrastructure to create a great experience.

In this corner, Apple…

While on a recent trip to San Francisco, the Sleep/Wake button on my iPhone stopped working.  When pressed, it no longer sprang back and the phone did not switch off or on.  While you can still wake the phone by pressing the home button, waiting for it to go sleep  after being idle for 60 seconds is more problematic than you would think.  Every time I would put the phone in my pocket, I would accidentally brush the still active screen, causing it to initiate some unintended feature.

Online research confirmed this was a hardware issue, so when I got back to Boston, I went to an Apple Store to see if they could help me.  Unfortunately, it turned out that only the Apple Geniuses could help, and they were out of appointments for that day.  Not a great start with this “in-person” approach.  However, they pointed me to a website where I could book online, and I set up an appointment for two days later when I had some free time.

When I came in, they knew who I was, and a tech named Jeff had me pull up a seat and took a look at the phone.  He quickly confirmed that the sleep/wake button was indeed broken, and since my phone was less than a year old, I was entitled to a free replacement.  He had one brought out, transferred my SIM card to it, and it activated.

We then went through the process of starting a restore from iCloud.  While I’ve been backing up to iCloud ever since iOS 5 came out, I’ve never seen it in action.  Initially, my heart sank when the phone announced it did not see any available backups to restore from.  However, Jeff took a look and figured out that the replacement’s OS needed to be updated to a more recent point release.  He spent 10 minutes updating the firmware, and then, sure enough, it saw the backup.  10 minutes later all of the data was restored, and the process of reloading all the apps had begun.  I was able to then leave the app store and complete the loading process using wifi at my home.

All through the process, Apple store personnel were friendly and helpful.  They allowed me to borrow power to recharge the new iPhone before I left, and they provided the technical expertise I needed for the restore process.  iCloud backup and restore worked just as Apple has always promised it would.

…and in this corner, Amazon!

On the flight back from San Francisco, my Kindle’s screen spontaneously stopped working properly.  The bottom 30% became frozen with gibberish.  The rest of the device was working fine, but any text in the lower portion was obscured.  Without access to the internet while we were in the air, I tried everything I could to fix it.  I rebooted it, I tried changing the screen orientation, but nothing seemed to work.

When I got home, an internet search confirmed that this was indeed a hardware problem, and I would need to reach out to Amazon.

Since Amazon has no equivalent of the “Apple Store” where I could just take it in for service, I steeled myself for the inevitable back-and-forths over email or navigating some nightmare of a phone tree intended to deflect silly questions from clueless users (“If you need help loading content onto your kindle, press 1.  If you are having trouble accessing previous purchases, press 2…”).

To my surprise, the process was quite delightful.  A visit to the “Kindle Support” page had a prominently labeled “Contact Us” button, which in turn asked me to choose which Kindle device I was having an issue with.  I selected mine, and an onscreen menu asked me to choose from a list of possible problems (Content, Device, etc.).  Choosing Device immediately popped up a second list of device issues, which led to a third list, allowing me to select “My Kindle is Damaged.”

It then told me I would need to seek support by phone, but instead of providing a phone number, it asked me to enter mine.  I typed it in and hit “connect”, and a few seconds later the phone rang!  I picked it up and was connected to a Kindle support representative. 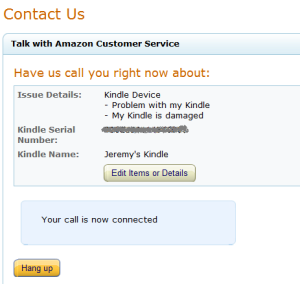 He had all of the information about who I was, my Kindle model, etc.  After reconfirming the problem, he walked me through the reboot process again (acknowledging that I had already tried this, but he was required to do it anyways).  When the problem was still there, he asked me to charge it, and he would call me back in an hour or so to do some further diagnostics.

One hour and 15 minutes later, my phone rang, and the representative was back . We ran through another reboot, and sure enough, it was still broken.  He then informed me that they were shipping me a new kindle, and all I needed to do was send the broken one back within 30 days.

It turns out that the kindle was shipped overnight express.  Less than 20 hours after having visited the kindle website, my replacement was delivered to my door.  It was already registered as my device, so I didn’t need to re-enter my information.  I just connected it to my wifi and re-downloaded my current book out of the archive list.

This was a much better experience than I had expected:

I’m a tech savvy user.  I spend a lot of time researching issues and trying to solve them myself.  When I get to the point of needing tech support, it generally means that I have hardware issue.  Since most tech support personnel are generally dealing with clueless users and simpler problems, I often find this to be a frustrating process.

Apple and Amazon each managed to make replacing my devices simple and easy.  For Apple, it was a high touch approach – book an appointment, but then make sure that the tech knows exactly how to help me and what to do.  For Amazon, it was low touch, but they made sure to use their web infrastructure to leverage the information they already had and get me to exactly the right point where someone could help me.

Both of them were an excellent experience.

This entry was posted in Uncategorized. Bookmark the permalink.