Home science experiment: teaching my preschooler about the three states of matter

When I was driving home with my four-year-old daughter on a cloudy day, she asked me if there were holes in the clouds.

“Yes, holes…to let the water out!” she said.

I started to explain how the clouds themselves were made up of water, but I could see that this idea was too abstract for her.  I decided a hands-on demonstration was in order.

This isn’t the first time I’ve taken it upon myself to explain scientific concepts to my kids.  Every time we encounter some gross inaccuracy in a children’s book (like climbing up a tall ladder to reach the moon in Eric Carle’s Papa, Please Get the Moon For Me), I feel the need to erase any possible misconceptions that this might create.  However, this was the first time I tried to create a real interactive experience, as opposed to looking at pictures in books or on the web.

I decided to focus on the three states of matter – liquid, solid, and gas.  To do this, we would transform water through all the states and back again – liquid to solid to liquid to gas to liquid.  I spent a few days gathering the necessary materials, and then after a practice run on my own, I went through it with my daughter.

We started by freezing the water.  I had her fill up ice cube trays and then we tried sticking our fingers in to see how in the liquid state, objects could pass through.

We put the trays in the freezer for a few hours and then tried sticking our fingers in.  Now our fingers were unable to pass through the water in its solid state.

Next, it was time to turn it back into water.  We took all of the ice cubs out of the tray, put them in a pot, and started heating it up on the stove.

The ice rapidly began to melt, and we watched over a couple of minutes as the ice cubes lost their shape and disappeared altogether.

It took me some trial and error to figure out the best way to do this.  Back in high school, we had all kinds of wonderful apparatus for distillation, including flasks, rubber stoppers, and tubes.  However, my job in computer software doesn’t have access to any of this, so I needed to improvise.  I spent a little while looking at distilling kits on Amazon, but I wasn’t really interested in spending $50 or more for this home science experiment.  I ended up going to the Home Depot and buying a funnel and some plastic tubing with the idea that I would capture some steam and then divert it into a cool glass where it would hopefully re-condense.

I had the good sense to test the idea the night before our experiment, and I discovered it wasn’t going to work.  The cheap plastic funnel rapidly started to warp from the heat of the steam, and no steam made it to the glass to condense; it just formed as vapor near the end attached to the funnel.

This failure inspired me to come up with something much simpler for the actual run-through with my daughter.  I took a glass pot top and put it in the freezer to cool it down.  We brought the melted ice water to a boil, and then I simply held the chilled pot top about six inches over the pot. 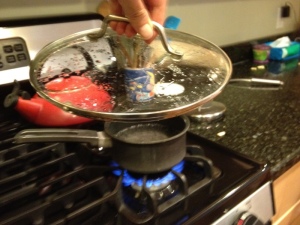 As the steam rose up, it reached the chilled surface of the pot top and immediately condensed into water.  Full droplets began to quickly form.  I was then able to turn it back over and examine it more closely with my daughter, and show her how there was water on the pot top now, even though it never had contact with the water in the pot.

Just like how water evaporates and rises up into the air to form clouds… right?!

As a final step, we then moved to the living room to demonstrate with blocks all three states of matter we just saw.  I put a bunch of square blocks in a tub, we practiced running our hands through them when they were loosely strewn about (just like a liquid).

I then packed them into a well-organized stack, and we looked at how we could no longer pass our hands through (just like a solid).

Finally, we picked some blocks up and tossed them up into the air (just like a gas).

Well, I don’t know how much of this she really absorbed, but she did have fun going through all of the steps.

And most importantly, I had fun trying to teach her.

This entry was posted in Uncategorized and tagged experiments, family, parenting. Bookmark the permalink.