Trying out GoldieBlox on my five year old daughter

When I wrote about introducing my daughter Ayelet to legos a couple of weeks ago, a friend suggested I take a look at GoldieBlox.  The idea was to design a construction toy set that was geared towards girls and finding ways to engage them in building.

Created by a female engineering grad from Stanford, the idea behind the toy was to build a story to associate with the blocks.  As the child read or listened to the story, she could follow along and build the same machine as the character.  The theory was that for girls, having a story would provide some purpose and narrative to the activity, while boys might generally be more interested in construction for construction’s sake.

I’m not expert in gender psychology, and I know there is a broad range in both boys and girls, but I could see how my daughter might very well become more interested if there was a story behind the project.  Plus, GoldieBlox was a small scale kickstarter funded project, and I wanted to support the effort.

Production was still ramping up when I placed my order at the beginning of March, so it it took about 8 weeks before arriving on my doorstep yesterday.  When my younger son Rafael went down for his nap, I took advantage of the one-on-one time with my daughter and pulled out the GoldieBlox.  She was immediately attracted to the bright pink box and eager to start.

The pink box was a hit

As it turns out, the story that comes with the blocks was not much of a story at all.  For no apparent reason, the character of Goldie Blox decides she wants to build a spinning music box for her dog, and then eventually a bunch of other animals want to spin too.  It’s not particularly clear why, and it failed to capture my daughter’s interest in a story, which was supposed to be one of the central ideas behind it.

The pink ribbon and rubber animals held her interest, despite the lack of a real story to go with them

Nonetheless, my daughter liked the rubber animals that she could attach to the posts, and she was excited by the pink ribbon that causes the spindles and animals to turn. 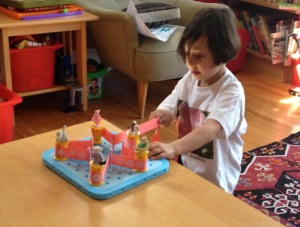 With my guidance, she made it through all of the steps to the end of the story.  The toy is intended for ages 6+, so she is just a little too young to do it on her own and needed some help figuring out how to wrap the ribbon to make all the spindles turn at once.

The “story” of GoldieBlox ended, but there were some more pictures of other creations you could make.  However, at this point, Ayelet was ready to be done and asked if she could go watch TV.

Shortly thereafter, Rafael woke up and came into the living room.  He immediately saw the GoldieBlox board and said, “What’s that?”

Rafael immediately gravitated to the GoldieBlox

He proceeded to start playing with the board, turning the spindles and pulling on the ribbon to make them turn.  We didn’t discuss the story, and he was only vaguely interested in the rubber animal characters.  He wanted to pull off and reattach the spindles.  It just naturally held his attention.

My sample set of one boy and one girl is vastly insufficient to draw any conclusions, but it does fit in with the stereotype of boys being naturally more inclined to build and assemble with blocks.

I think GoldieBlox has a great idea of using a story to engage girls in building, although I must say that I had hoped for a more engaging narrative.  I had assumed that Goldie would have to some how build a contraption to solve some larger problem that my daughter could relate to, whereas the actual reason for the building seems rather arbitrary.  Also, the “advanced activities” are all about making interesting designs, for which the moving ribbons and spindles seem rather extraneous.  But these are easy criticisms for me to make on the sidelines.  The challenges of building an affordable product and concise enough story to fit into a printable book are huge, and I don’t know that I could do better.

I did notice that someone clearly put some thought into the modularity of the board.  I spotted some holes in the side that would allow spindles to be attached horizontally rather than vertically.  After dinner I showed Ayelet and Rafael how we could attach spindles to the top and the side to create an elevator for the rubber animals.

Using holes on the side, I showed the kids how we could make an elevator

Rafael liked turning the crank, but my daughter enjoyed making the animals go up and down.  A different approach for each of them.