Posted on January 1, 2014 by jrothmanshore

The mere mention of the word IKEA can cause PTSD in some people – a long, overwhelming shopping trek through a crowded maze, stressful decisions about what furniture to buy, purchasing a dozen things you never realized you needed in the marketplace, and then when you bring all home, trying to follow the bewildering wordless instructions.

But, if you can manage to handle that, IKEA actually makes a pretty good rainy day activity for kids. It provides a great space to run around, and many of the smaller utility items actually make great constructions projects for small hands when you get home.

We decided to make a visit last Sunday with our 3- and 5-year-olds in tow. It was cold and rainy, and we needed a fresh indoor space besides our usual destinations like the Boston Science Museum.

Our main goal was to research some options for future purchases, not to actually buy any larger furniture. Our younger son is going to soon outgrow his toddler bed, and we are considering a bunk bed. We wanted to see what IKEA had and get a sense of the size. Also, our 15-year-old dining room chairs have not held up well against the children, and we are in the market for some cheap alternatives to last for a couple of years until the kids are older (and neater).

The showroom on the upper level made a great space for the kids to run around. We had them sit in each dining room chair we passed and give us an opinion as to whether it was “comfortable”.  It’s a huge space, and no one minds the kids climbing onto the the beds, couches, and other furniture.

At the end of the furniture section is the kids furniture area, which is stuffed with small toys and decorations for their rooms.

Before we went in, we made an agreement with the kids – they would each be allowed to purchase ONE item under $15. We knew that it wouldn’t be possible to get out without buying something for them, so making a deal before walking into the store avoided lots of whining and created a fun decision process.

Ayelet chose one of the stuffed rats for just $2.99.

To my amazement, my daughter chose a stuffed rat for just $2.99. She named it Cindy. My son chose a toy animal barn.

Down in the marketplace, I bought a small standing mirror for each of the kids. They always want to climb up onto the bathroom sink counter so that they can see themselves in the mirror as they brush their teeth, and these free-standing adjustable models would allow them to keep their feet on the floor.

This small free standing mirror is easy to assemble

Inevitably, we also bought a few things for ourselves, including a small shelf for our bedroom and a few storage bins.

After about an hour and a half of running around IKEA, it was time to go home.  The kids had fun, and we were able to scope out some chair options and a possible bunk bed.

Back at the house, those small mirrors made a perfect small project for each of the kids. Assembly was quite simple, but it made a great introductory project.  There was a neck that needed to be attached to the base using a nut, and then a screwdriver was required to connect the mirror.

It took each of them a few minutes to assemble their mirrors, and they actually learned a little bit about how objects are put together.

In the meantime, I assembled the shelves I had purchased, and they were able to help as well. Most IKEA projects use just a simple allen wrench, which is within their range. Not as fast as putting it together myself, but they can do it.

Of course, my daughter got most excited about the box the shelves came in. She decided that they would make a great home for her new stuffed rat, Cindy. She got some markers and colored it in, and she used a pair of scissors to cut out a door. 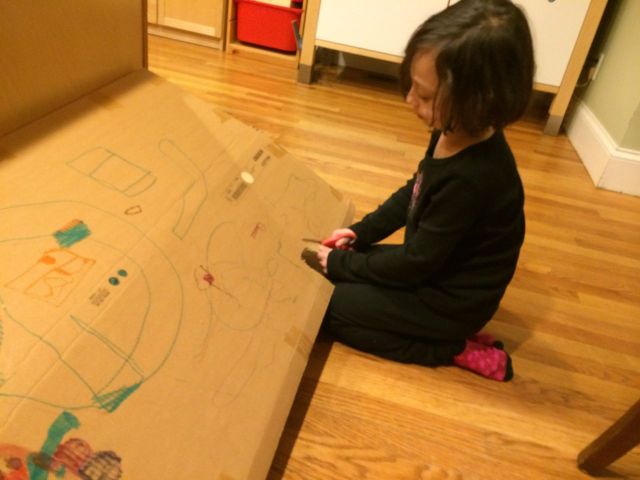 Overall, it made for a fun afternoon on a rainy winter day. And like the famous Calvin and Hobbes cartoon, the best part ended up being the box.