At this point, I’m fairly used to people jokingly asking me if my iPhone 6 Plus fits in pocket. Yes, it fits, no problem.

Well, as it turns out, “no problem” turns out to be a slight exaggeration.

A few weeks after I bought the phone, I decided to get a case to make it easier to hold. The phone’s larger size made it harder to use one handed, and I was constantly afraid that the smooth metal back would slip out of my hands while I was straining to reach characters on the far left of the keyboard.

At the time, case options for the new phone were few and far between, so I chose Apple’s blue silicon case. The rubbery silicon was very grippy, making me less worried about accidentally dropping it.

The case did have some downsides, however. Because it was so grippy, it was much harder to put in and take out of my pocket.  Whereas I could just slip my old phones in and out, the silicone would grab the edges of the pocket, requiring a lot of tugging.

Also, the case added a lot of bulk. Part of the beauty of the iPhone 6 and 6 Plus is how thin the phones are, but that was mostly undone by the case. The large surface area of the 6 Plus is offset by its thinness, but the added thickness of the case made it seem much more massive.

And then my jeans wore out.

Now, to be clear, my jeans wearing out is not a surprising thing. Every few years, I buy two identical pairs of Gap 32×32 jeans, straight cut. I wear them a few times a week throughout most of the year until they wear out, and then I replace them. I’ve had my current set for a couple of years now, so they are about due for replacement.

What was surprising was how the they wore out. The right pocket started to fray rather badly. 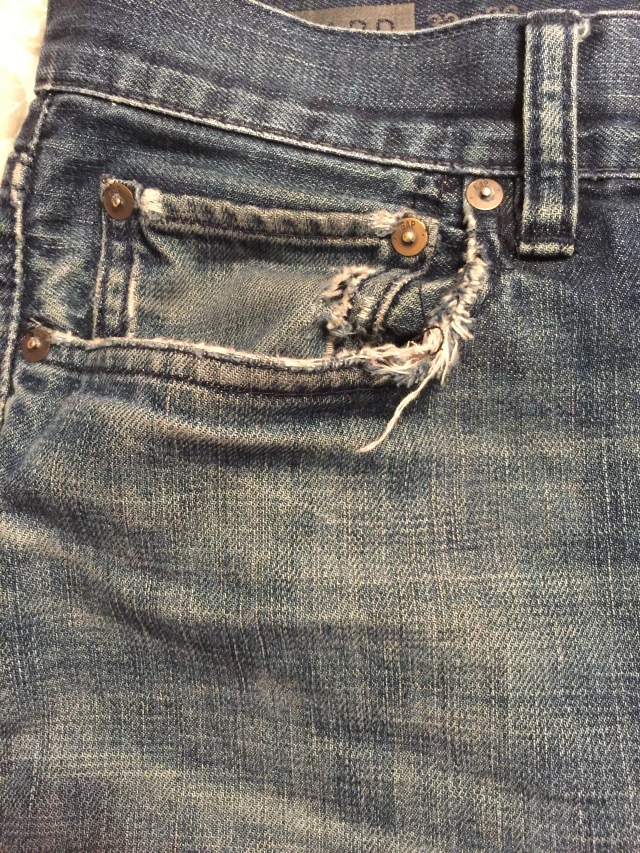 The pocket of my jeans wore out prematurely from constantly getting caught on the iPhone’s silicone case.

After puzzling about it for a minute, I realized that the constantly tugging on the fabric from the case had slowly but surely ripped apart the pocket lining over the past few months. I was vaguely aware that it was a bit of a pain to slip the phone in and out of my pocket, but I hadn’t realized the damage it was doing to the jeans.

I decided it was time to get rid of the case. I had become more comfortable with the weight and balance of the phone, so I was less worried about dropping it. After searching around for a while, I found a nice skin that I could put on the back of the phone from DecalGirl. This would make the phone more distinguishable from everybody else’s and still add some extra friction so that I would be less likely to drop it.

As soon as I took the phone out of its case and put the skin on, I became much happier with it. In addition to easily slipping in and out of my pocket, the return to thinness made it much more pleasing to hold and use. I regretted not doing it sooner.

Of course, I did drop it a few days later. Not by typing it one handed, though. I was in an airport electronics shop, and they sold an armband for runners that claimed to fit the 6 Plus. Curious, I held my phone up to it, and it somehow slipped out of my hand and fell from shoulder height onto the hard tile floor.

Everyone in the shop froze and looked at me in horror, realizing what had happened. I bent down and picked up the phone to examine it. It was fine, not even a scratch.

Since then, I haven’t dropped it again (yet). And of course I have bought some new jeans.

This entry was posted in Uncategorized and tagged home technology, iPhone, mobile. Bookmark the permalink.