Solved: How to move iPhone contacts to a different account on the device itself

Posted on February 1, 2015 by jrothmanshore

Last week, I discovered that my wife’s iPhone has been incorrectly saving all new contacts locally on the iPhone, rather than storing them in Gmail.

I stumbled on the issue when setting up a new MacBook Pro for her to replace the four-year-old Mac laptop she had been using, which stopped working. I set up iCloud so that she could send and receive text messages from the desktop, and I noticed that all of the recipients showed up as just phone numbers since the contacts were not synced on the computer.

I assumed this would be a quick fix and imported her gmail account into the Mac’s address book, but to my surprise, this only partially fixed the problem – about a 1/3 of the contacts still showed up as phone numbers. I spent a while tracing the problem back and discovered that under the settings for “Mail, Contacts, Calendars”, the setting for “Default Account” for contacts was “iPhone”.

I’m not exactly sure how this happened, but my guess is that at some point when we were reconfiguring the phone, we temporarily removed her gmail account, and it probably then automatically reverted this setting to save contacts on the iPhone. Then, when we added the account back, we never thought to go in and change it.

The problem had clearly been going on for a while, as there were 83 contacts stored only on the iPhone. We needed to fix it, and it was too many to do manually. I first looked to see if I could edit contacts on the iPhone and switch what account they were synced to, but there was no option. I then spent some time googling around for solutions to this, but the answers were much too complicated. They involved syncing the phone to the Mac address book and then importing them into gmail. I wanted something much easier.

At last, I stumbled on a discussion group that mentioned Orbi Tools. It’s a $0.99 app that was designed to allow users of the Orbi service to upload contacts from their phone into their cloud offering. However, it allows you to move contacts from one account on your iPhone into any other account.

The interface was simple, but it was unable to identify the gmail account by name.

I downloaded it and selected the option to move contacts. The interface was a little clunky, as it did not list the gmail account by name, but rather just “CardDAV, Address Book”. However, it was the only online account on the phone, so I figured it had to be the right one. It showed me all 83 contacts but gave me an option to move them all rather than selecting them individually. 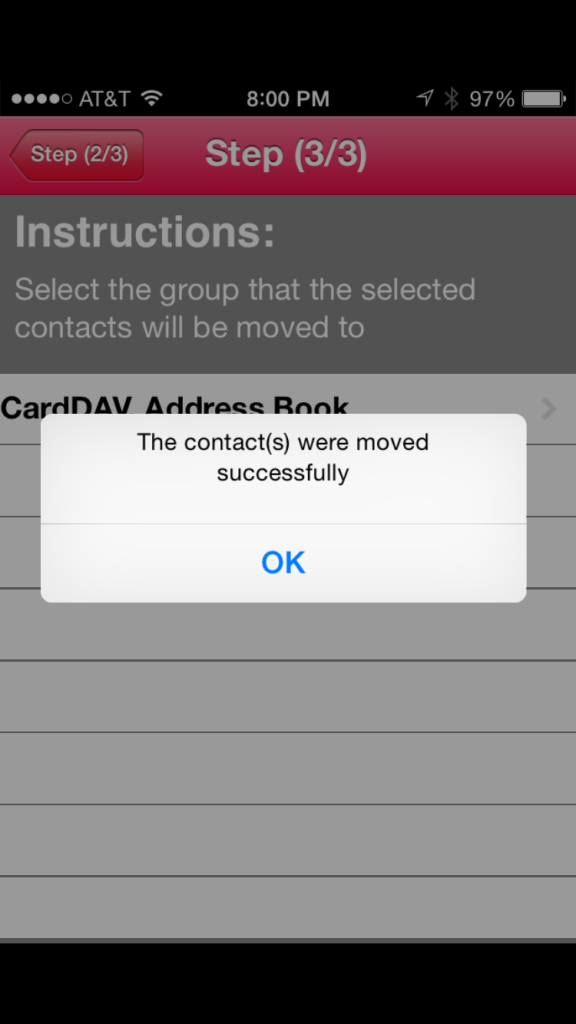 The contacts were automatically imported.

After working for a minute, the contacts were imported. Within minutes, the contacts synced through gmail back to her Mac, and all of the text messages contacts displayed properly.

This entry was posted in Uncategorized and tagged family, home technology, iOS, iPhone. Bookmark the permalink.