Diet Coke or Coke Zero? Turns out I am a marketing statistic

Posted on December 8, 2013 by jrothmanshore

I like to think of myself as a reasonable well educated, critical thinker.  I like data and facts.  I like to look at problems from many different angles.

So nothing drives me crazier than when I discover that a marketer knows me (or my kids) better than I do. It really irritated me that Lego’s marketers knew that girl-targeted “Lego Friends” would be a hit with my daughter, since I was convinced that Lego’s are perfectly gender neutral.

Well, it turns out that Coca-Cola’s soda marketers have me figured out too.

I know I really shouldn’t drink soda. It’s terrible for my teeth, and if I drink it too late in the day, it keeps me up at night. Still, on many afternoons I find myself needing a little bit of a boost, and nothing quite hits the spot like a soda.  Especially a nice, 12-ounce can of Pepsi.

I’m relatively trim, but I don’t get much exercise, and drinking 150 calories of empty calories just seemed wasteful to me. I knew I should switch to zero-calorie soda, but I had always hated the taste of diet soda.

Then, I came across commercials for Coke Zero. The radio advertisements touted that it tasted more like regular Coca-Cola, so I figured I would give it a try. It still was a far cry from what I thought of us a regular soda, but I got used to it. I didn’t like it as much as the Pepsi, but I figured it was better for me.

That was a couple of months ago.

Then, to my horror, I discovered the truth behind the invention of Coke Zero – it was designed to appeal to men! It seems that the marketers behind Coca-Cola had discovered that men don’t like the idea of drinking “diet” soda, and the majority of the people who drink it are women. In an effort to reach more men, they created a “new” soda that they claimed tasted more like regular Coca-Cola.

And that was me. I had a negative association in my mind with drinking diet soda, but somehow Coke Zero was okay. And they had successfully switched me from Pepsi to Coca-Cola. It was an all around win for the marketing team.

So, how much is this purely marketing? Is Coke Zero actually different than Diet Coke, or is it exactly the same? I was pondering this with some of my colleagues, and one of them recommended a taste test.  We poured cups of Diet Coke and Coke Zero blindly and compared the tastes. 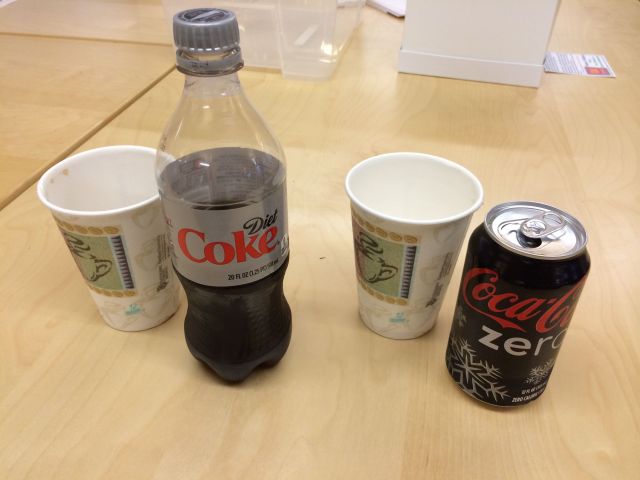 It turns out there is a difference in the taste, but it is pretty minor. Both clearly taste like “diet” soda, but the Coke Zero has a sweeter flavor. So there is something to the claim that it is more like real Coca-Cola, but it is still mostly branding.

And the kicker? I discovered that I actually prefer the less sweet flavor of Diet Coke.

This entry was posted in Uncategorized and tagged experiments, marketing. Bookmark the permalink.